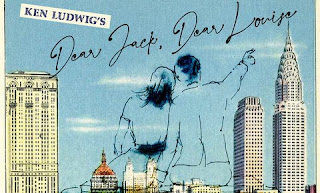 WHEN: October 26 through November 21
WHERE: New Brunswick Performing Arts Center, 9 Livingston Ave., New Brunswick
TICKETS: now on sale starting at $25 at www.georgestplayhouse.org.  Season subscriptions are also available online at a discount of up to 20% off regular ticket prices.

Set during World War II, this charming LOVE STORY chronicles a long distance romance between a young soldier and his sweetheart, a young actress on Broadway.

“This funny, touching, patriotic and uplifting story, based on the playwright’s parents, is the perfect “Welcome Home to George Street Playhouse,” said Director David Saint.   Come fall in love with live theatre all over again.”

Theatre Audiences world-wide have fallen in love with Tony Award winner Ken Ludwig’s comedies including the Lend Me a Tenor and recent regional theatre hit Murder on the Orient Express.  Dear Jack, Dear Louise, his own personal valentine to his parents and their war-time courtship, premiered at Arena Stage in 2019 to great acclaim and audience adoration.

Playing the titular Jack Ludwig is Bill Army, who appeared on Broadway in the original company of The Band’s Visit (Tony Award for Best Musical, Grammy Award). Other productions include Act One at Lincoln Center, Relatively Speaking on Broadway opposite Marlo Thomas. All’s Well That Ends Well and Measure for Measure at the Delacorte and The Changeling at Red Bull Theater. His film and television credits include Deadbeat (Hulu) and COHAB (YouTube).

Amelia Pedlow plays Louise Rabiner. Her Off-Broadway and regional work includes the World Premiere of Dear Jack, Dear Louise at Arena Stage, Intelligence (NYTW Next Door Series), The Metromaniacs, and Tis Pity She’s a Whore at Red Bull Theater. Other credits include Playing with Fire at The Guthrie, Red Velvet at the Old Globe, Ether Dome at La Jolla Playhouse, Hartford Stage and The Huntington. Her television appearances include The Good Wife, Blue Bloods, Shades of Blue and The Black List.

COVID SAFETY INFORMATION: George Street Playhouse and The New Brunswick Performing Arts Center are guided by CDC guidelines and the state of New Jersey for our policies in preventing the spread of COVID-19 and protecting the health of our audiences, staff, volunteers, artists and their production teams.

Beginning September 1, patrons attending any performance at the New Brunswick Performing Arts Center (NBPAC) must show proof of vaccination via a vaccine card, or proof through NJ’s Docket App (which can be downloaded from the app store on your phone). If not vaccinated, you must present a Negative COVID-19 PCR test taken within 72 hours of the performance date.

All patrons are required to wear masks at all times while inside the venue. This includes children who have not been vaccinated. This policy will be re-evaluated in November 2021.