Opening the season will be the new musical The Evolution of (Henry) Mann, featuring music and lyrics by Drama Desk nominee Douglas J. Cohen (Children’s Letters to God, The Opposite of Sex) and book and lyrics by Dan Elish (13: The Musical) based on his novel, Nine Wives.

Directed by Jason Aguirre, the production will have its first preview on October 14, 2021, with opening night on October 16 and closing performance on October 24.

The Evolution Of (Henry) Mann follows Henry Mann, a 30-something single New Yorker eager to settle down…or so he thinks. After receiving an invitation to his ex-fiancée’s wedding, he embarks on a quest to find his perfect date. This musical comedy had its New York premiere in 2018 and is a fun and uplifting look at love in the 21st century.

Next will be The Right to be Forgotten, by Sharyn Rothstein (By the Water, USA Network’s "Suits"), a powerful look at today’s social media landscape. The drama explores how a young man’s mistake at 17 haunts him online a decade later. Desperate for a normal life, he goes to extraordinary lengths to erase his indiscretion.

First preview will be March 17, 2022, with a March 19 opening and final performance on March 27. Rothstein’s A Good Farmer was presented by ATG in 2018 to wide acclaim. 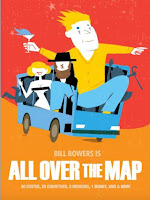 Rounding out the season will be All Over the Map, an autobiographical one-man show performed by Bill Bowers, a critically acclaimed entertainer who presents and teaches the art of physical storytelling throughout the world. He has spent over 30 years on the road performing in 25 countries, appearing on Broadway, in the White House….and in the finest grade school cafeterias. In All Over The Map, he shares stories and characters that stay with audiences long after lights up.

“The American Theater Group is thrilled to resume live performances in our beautiful, state-of-the-art new home,” said Jim Vagias, Producing Artistic Director of ATG. “Our new season offers diverse offerings with wide appeal, and we know audiences are as excited to watch as we are to perform.”

“We strive to meet the demand for culture and entertainment in our Basking Ridge community. Our over 250 seat theater is stunning and intimate - there is not a bad seat in the house. Programming is varied to meet a variety of tastes including musical theater, operettas, and ballet as well as popular music. We are proud to bring professional entertainment from the American Theater Group and other performing arts groups not only to our residents but to the community at large,” said Brian Lawrence, President & CEO of Fellowship Senior Living.

“The American Theater Group is thrilled to resume live performances in our beautiful, state-of-the-art new home,” said Jim Vagias, Producing Artistic Director of ATG. “Our new season offers diverse offerings with wide appeal, and we know audiences are as excited to watch as we are to perform.”

Ticket information and additional details can be found HERE  or www.americantheatergroup.org or by calling 908-580-3892.  Fellowship Cultural Arts Center is located on the scenic campus of Fellowship Village at 8000 Fellowship Road in Basking Ridge, New Jersey.  All patrons must provide proof of vaccination in order to enter the Mitchell and Ann Sieminski Theater, and masks must be worn.

American Theater Group (ATG), founded in 2012, produces new and classic works primarily by American playwrights with an emphasis on the development of new works and the rediscovery of undeservedly neglected older ones. ATG engages audiences by making theater’s glorious possibilities accessible to the diverse community in which we live, through remarkable performances as well as quality arts-in-education programming. ATG programming is made possible in part by funds from the Somerset County Cultural & Heritage Commission, a partner of the New Jersey State Council on the Arts. More information can be found at www.americantheatergroup.org.