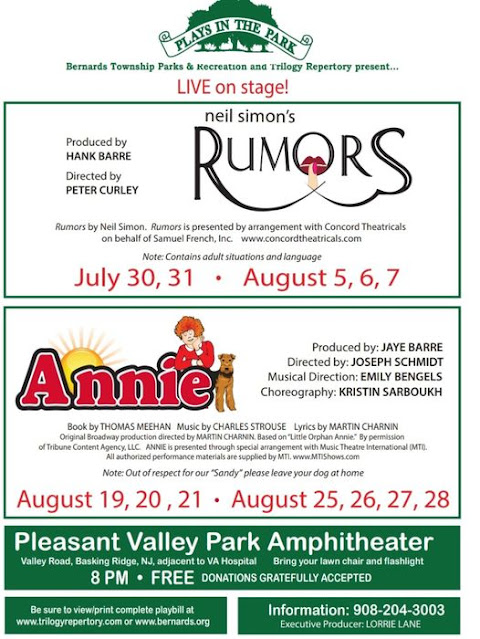 As the second production in Bernards Township’s “Plays in the Park” summer series, Trilogy Repertory Company will produce

WHEN:  August 19, 20, 21, 25, 26, 27, and 28, at 8 PM each evening
WHERE: the outdoor amphitheater at Pleasant Valley Park, Valley Road, in Basking Ridge
ADMISSION: The shows are free to the public, but donations to support this program sponsored by the Bernards Township Department of Recreation are gratefully accepted.

Patrons should plan to bring a lawn chair, blanket and a flashlight to enjoy a night of theater under the stars.

Unvaccinated individuals are encouraged to wear a mask and practice social distancing. Please do not attend a performance if you are sick!

Out of respect for the dog playing Sandy, please leave your dogs at home.

Trilogy’s production is produced by Jaye Barre and directed by Joe Schmidt, with musical direction by Emily Bengels and choreography by Kristen Sarboukh,

Annie opened on Broadway at the Alvin Theater on April 21, 1977, and ran for 2,377 performances, winning seven Tony Awards, including “Best Musical.” There have been two Broadway revivals and three movies, with stage productions all over the world. Annie is based on Harold Gray’s comic strip, “Little Orphan Annie” and James Whitcomb Riley’s poem “Little Orphant Annie.” The musical’s book was written by Thomas Meehan, with music by Charles Strouse and lyrics by Martin Charnin. Annie Live! is an upcoming musical television special that will air on NBC on December 2, 2021.

For further information call 908 204-3003 or go to the Trilogy Repertory website at www.trilogyrepertory.com