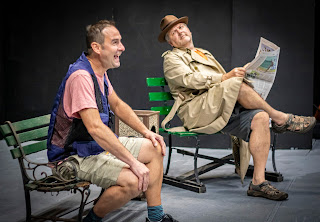 Once upon a time (in what feels like an eon ago), I wrote, “If it’s summer, it must be time for Jersey Voices.”

That was B.P. (before the pandemic), and I am glad to report that Jersey Voices, the wonderful festival of one-act plays by New Jersey playwrights, has returned to the Chatham Playhouse stage, opening on Friday, August 6th, and running through August 15.

Seven entries were selected from close to 400 submissions this year. As usual, the productions range from terrific to meh, but all are thought-provoking enough to discuss on the ride home from the theater!

Starting off the evening is a sweet two-hander, Cloud Illusions, by Amber Kusching and directed by Arnold Buchiane, that involves a chance meeting between two people that affects both their lives. Lying on the ground in her wedding dress looking up at the clouds, Joan (Anna McCabe) is encountered by busy lawyer Mitchel (Chip Prestera). As she reveals that she has run away from the stress of her imminent wedding, he decides to join her on the ground. Together, they discover that one should take time to see the “ice cream castles in the air” formed by the clouds—a nice riff on taking time to “smell the roses” in our busy lives. Both McCabe and Prestera portray these two somewhat lost people with empathy and pathos, without resorting to the saccharine characterizations it would be so easy to fall into, given the playlet’s “message.”

Bernice’s Birthday, by Brigid Amos and directed by Joann Lopresti Scanlon, is a real winner! A cantankerous husband takes his wife of many years out to celebrate her birthday in New York City. What should they order? Where should they eat? Outdoors? Indoors? When, the second he steps away, and a young, attractive musician steps in to serenade her, trouble brews. The repartee between the curmudgeonly Lloyd (Fred Dennehy) and the prim, timid Bernice (Jean Kuras) flows naturally, marked by his overbearing dominance and her emergence as a woman who finally speaks her mind. We want to get up a cheer when she puts him in his place and gets what SHE wants on her day. David Romankow’s Musician doesn’t have much to do except sing a few bars, but he is the catalyst for the change in the power dynamics of the older couple’s relationship. Scanlon’s crisp direction rachets up the tension as the play progresses, leading to a fine denouement.

Another terrific entry is Bigger Than Pretend, a wacky dramedy by Robin Rice and directed by Jackie Jacobi. A homeless couple uses their imagination to dream away their dire circumstances, but some challenges are too great, even for make-believe. Terrific performances are turned in by Lauri MacMillan as the dour Remington and Gloria Lamoureux as the fey Wadsworth, the former concerned about the environment, the latter more impulsive, so much so that she lifts her partner out of the doldrums to face, once again, life on the move. The hopelessness, tempered by the creative optimism, feels real if a bit off the wall, and lifts the mood created in the opening moments of the play.

The third terrific playlet, an absurdist comedy entitled The Village Photo, by Charles Grayson and directed by William Michael Harper, involves Reed, a recent Pulitzer-prize winning photographer who battles his conscience during a clandestine rendezvous with Gideon, a high-level intelligence officer who demands the secret behind a viral photo. Two superb performances by Matt McCarthy as Reed and David Romankow as Gideon drive a convoluted plot that feels like it’s been taken straight out of a bad spy novel. Romankow’s incessant questioning reduces McCarthy’s Reed to a blubbering idiot, much to the delight of the audience. It was a terrific way to end the evening. (Top image: Matt McCarthy and Dave Romankow)

My Dad Is Bald by Minjae Kim and directed by John A.C. Kennedy involves two high school friends as they grapple with each other’s preconceptions about family, image, childhood loss, the evolution of relationships, the value of the present moment, and the cultural implications of a really short haircut—all during a half-court game of basketball. The script had some fine moments in it but suffered from a lack of projection by the two young actors, who had to talk while playing basketball (yes, on the Playhouse stage) and who often faced away from the audience, making the dialogue often difficult to hear. Genjiro (Wasif Sami) appears rather clueless as he talks about his new haircut and its effect on girls while Zinhong (Kyle Cao) grapples with the changed behavior of his  father now bald from a catastrophic accident; his son misses the way the two interacted in the past. As the teens talk, they come to some universal truths about life, with the now more sympathetic Genjiro counselling his buddy about how to deal with this new situation. Kennedy does a fine job getting his young actors to maneuver around the playing space; I just wish he had gotten them to speak louder.

A Benevolent Alliance of Mourners by Ken Preuss and directed by Lionel Ruland also tackles a serious subject, the death of a young person. Danielle, home from college to attend the funeral of a friend, and Ellie, hired to sing at the service, meet by chance outside the church, where they converse, confess, and connect in unexpected ways. Not much happens during the course of the performance, but Sarah DeVisio (Danielle, left) and Megan Pereira (Ellie, right) have several epiphanies that change them before they open the door to rejoin the mourners. It’s a sweet play and delightful to see them unwrap their protective cloaks to reveal the vulnerability beneath.

Finally, A Dave with Destiny, also by Ken Preuss and directed by Elizabeth Rogers, is the slightest playlet of the lot. Dave (Jason Kruk) and Destiny (Jessica Phelan) meet on a street corner and struggle to discover why each recognized the other. Have they met before? Is there a deeper connection? Are they crazy? Perhaps all three. The most fun comes from the two firing off possible connections, one after another, until they discover why they have a feeling of recognition. It’s a bit silly but indicative of the interconnectedness of all of us, however wacky it may be. Rogers keeps the rapid-fire dialogue moving along apace, and Phelan turns in a polished performance, quite a feat since she took over the role only three days before!

Since 1995, Jersey Voices has provided a venue for more than 90 New Jersey playwrights to showcase their work. The festival of original plays has become a fixture on the local theater scene and is an event not to be missed! Welcome back to this fine production!

Performance dates are August 6, 7, 13 and 14 at 8 PM and August 15 at 7 PM. All performances are held at the Chatham Playhouse 23 North Passaic Ave Chatham, NJ.  All Tickets are $15.  To access the theater’s online ticketing service, simply go to ccp.booktix.com.  For more information, call the box office at (973) 635-7363 or go to www.chathamplayers.org. It is highly recommended that tickets be purchased in advance.

Audience members who have not been fully vaccinated MUST properly wear a mask at all times while in the theater. Patrons with special needs requiring seating accommodations should contact the Playhouse at least 24 hours prior to the performance. Without prior notice, accommodations cannot be guaranteed.