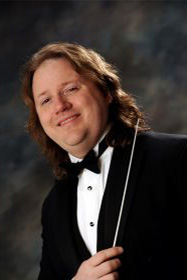 Light Opera of New Jersey (LONJ) announces that distinguished conductor Jason Tramm will be the company’s next Executive Director. This position had previously been held by company founders William Corson and Lauran Fulton Corson since the company’s inception in 1995.

Tramm will assume the position in August 2021 and will be immediately charged with leading the company’s artistic planning and operations for the 2021- 2022 season. Information about LONJ’s upcoming Gala and shows will be announced shortly.

Founders Bill and Lauran Corson underscored their pleasure at Tramm’s appointment and said, “We are ecstatic to have such a great musician, producer and friend taking over the reins of LONJ; looking forward to many more great years to come.” Going forward, the Corsons will serve on the LONJ Board of Trustees.

As Executive Director Tramm will be fully responsible for all operations of LONJ, including the overall quality of LONJ productions. He will have artistic authority over the company’s orchestra, chorus and staff, working in tandem with the Board of Trustees to oversee planning, casting and producing. Responsibilities will include repertoire choices, assembling production teams, and developing artistic collaborations with other arts organizations.

“Becoming the Executive Director of the Light Opera of New Jersey is both an honor and an opportunity for me to utilize my skills to serve the vision of LONJ founders Bill and Lauran Corson and to help reignite the company’s mission after the pandemic. I look forward to working with LONJ’s dedicated Board of Trustees and committed stakeholders, to shape a new, bright future for our art form in New Jersey.

“Jason was the clear choice of the Company,” said Heath Weisberg, Chairman of the Board.  “Jason is a proven leader with deep musical knowledge and artistry, and a distinguished track record of innovation and talent development. The Board of Trustees is confident that Jason, together with the rest of the LONJ team, will ensure strong execution of our growth strategy and will take to new heights our mission of educating and delighting performers and audiences, especially those who have fewer opportunities to experience light opera and musical theater.”

Hailed as “a conductor to watch” by Symphony Magazine and “Filled with Italianate Passion” by the Huffington Post, Jason C. Tramm’s work in the opera, choral and symphonic realms have received critical acclaim throughout the United States and abroad. Maestro Tramm serves as Artistic Director and Principal Conductor with the MidAtlantic Artistic Productions with whom he made his Carnegie Hall (Stern Auditorium) debut in 2015. He also served as Artistic Director of the New Jersey State Opera from 2008 to 2012.  His 2009 HDTV broadcast with PBS affiliate NJN of "Verdi Requiem: Live from Ocean Grove," garnered an Emmy Award nomination.

The busy maestro is entering his 15th season as Director of Music, in Residence, of the Ocean Grove Camp Meeting Association, where he oversees and directs one of the most dynamic summer music programs in the east coast. He also serves as the Music Director/Taghkanic Chorale, Music Director/Axelrod Contemporary Ballet Ensemble, and is the Principal Guest Conductor/Long Island Concert Orchestra. Tramm has also conducted abroad in Italy and several Eastern European countries.

As an accomplished educator, Tramm serves as an Associate Professor and Director of Choral Activities at Seton Hall University, in South Orange, NJ. In 2017, Seton Hall University Awarded him the University Faculty Teacher of the Year. Educating and mentoring the next generation of musicians has always been a central part of his career.

In response to the cancellation of all live performances in 2020 he launched the podcast, “Music Matters with Jason Tramm”, where he has explored artistic innovation during a challenging time, as seen through the eyes of distinguished colleagues. It has become YouTube’s fastest growing musical culture podcast and can be streamed from both YouTube and Spotify or heard on WMCA radio (wmca.com, AM 570, FM 102.3 New York City) from 11:30 AM until noon on Saturdays.

ABOUT LIGHT OPERA OF NEW JERSEY

Light Opera of New Jersey (LONJ) is New Jersey’s premier regional musical theater and light opera company. LONJ performances feature professional singers in lead roles backed by highly skilled amateurs, accompanied by some of the area’s finest instrumentalists and supported by fabulous production teams. LONJ is a registered non-profit founded in 1995 based in Basking Ridge, NJ.  LONJ programs are made possible in part by funds from the New Jersey State Council on the Arts/Department of State, a partner agency of the National Endowment for the Arts and administered by the Somerset County Cultural and Heritage Commission through the State County Partnership Local Arts Program. To learn more about the LONJ visit their website www.LONJ.org and follow them on Facebook, Instagram and LinkedIn.