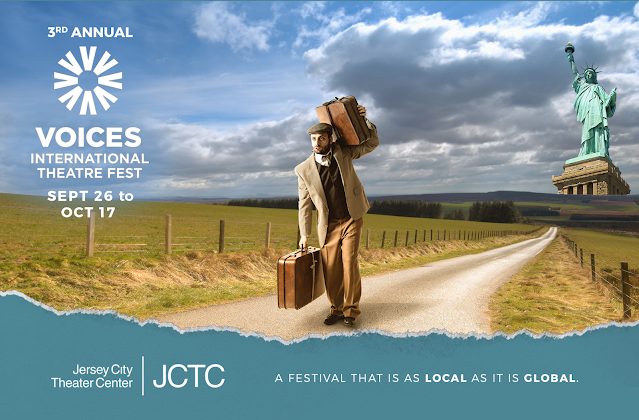 The Jersey City Theater Center (JCTC) presents the
3rd Annual Voices International Theatre Festival
WHEN: three weeks from Sunday Sept 26 to Sunday October 17
WHERE: virtual and in-person events in venues throughout Jersey City
While welcoming companies from many parts of the world, including the former Soviet Union, Africa, Europe and the Middle East, Voices puts special emphasis on engaging local artists and groups, especially those creating contemporary or traditional work inspired by cultures from abroad. The overarching theme of the 2021 Festival is “art and democracy.” 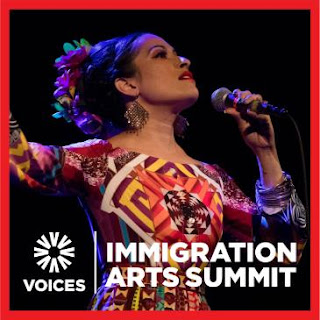 A new annual sidebar of the Festival will be an Immigration Arts Summit—a full day of performances and collaborative workshops convening tri-State organizations, community leaders and cultural influencers—on Sunday, October 3.

The festival’s Opening Day, on Sunday, September 26, at J. Owen Grundy Park (promenade and pier), off the intersection of Hudson and Montgomery Streets, will feature open-air performances, a mini dance-theater workshop, and an array of local businesses sharing information about their products and services. The Opening Ceremony at 6pm will feature screened and live greetings from participants around the world, plus a screening of an official Festival Selection.

Announcement of the Festival’s preliminary line-up of events will be made on August 20, at which time tickets will go on sale at www.jctcenter.org.
Just under ten in-person productions will be staged in Jersey City, in both theatre and alternative locations, which includes JCTC’s anchor facility, the flexible seating theatre and concert venue White Eagle Hall, 337 Newark Avenue.
The online events—a mix of both recorded theatre and live, Zoom performances staged in different cities—is anticipated to be just under 10.
There will be approximately 5 special events—including the Opening Ceremony and Immigration Arts Summit—in Jersey City locations including hospitality, school and community facilities in several neighborhoods.

“Many of the artists and companies we are in touch with are deeply affected by the instability and fragility of our world today,” says Olga Levina, JCTC’s co-founding artistic director. “The theme of ‘art and democracy’ resonates with so many of our friends and colleagues around the world, for multiple reasons. It is truly an honor for me, an immigrant for Belarus, to be able to invite diverse artists from different countries to Jersey City, historically a welcoming gateway for people from around the world.”
Jersey City, known popularly as the Golden Gateway of America, can lay claim to having one of the highest concentrations of ethnic groups by population density in the country.

“One of the hidden advantages of last year’s all-virtual Festival was how it taught us all these new ways to engage with companies and artists virtually,” Levina observes. “Several of the companies we had in the Festival last year would not otherwise be able to travel to the United States, for a variety of reasons.  This year, as we mix in-person and virtual productions we feel we can expand this important two-way access to other parts of the world.  It is so important, especially in America, for us to know how to do this, to know how to look and relate beyond our borders.”

ABOUT JCTC
JCTC was founded in 2006 by local developer Ben LoPiccolo, the theater director Olga Levina, and director and educator Jorge Cacheiro. Levina and LoPiccolo preserved and re-built a local landmark, White Eagle Hall, during the downturn of 2008, transforming it into a high-end performing arts venue that can accommodate large-scale music, dance, and theatre productions.

JCTC's season is supported by the City of Jersey City (Steven M. Fulop, mayor); the Jersey City Office of Cultural Affairs; the Hudson County Chamber of Commerce; the NJ Cultural Trust; Princeton Area Community Foundation; NJ Theater Alliance; the Hudson County Office of Cultural and Heritage Affairs (Thomas A. DeGise, Hudson County executive); the Hudson County Board of County commissioners, and the New Jersey State Council on the Arts, a division of the Department of State. JCTC is a proud to be a member of ArtPride NJ; NJ Together; NJ Theater Alliance; APAP, and ISPA, and equally proud to partner with Under the Radar; Movement Without Borders; Rehearsal for Truth Theatre Festival; High Fest and New Jersey City University.