Imani Winds at the Morris Museum Sunday, August 22, with A Woman's Perspective

Imani Winds at the Morris Museum with 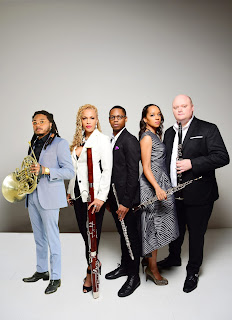 Buy a package of eight or more concerts and get early access all season long.  All processing fees are waived for package buyers.

Groups that are purchasing five or more blocks for one performance will also have advance access and the option of having a designated pre-performance area to host a reception.

Celebrating over two decades of music-making, the Grammy-nominated Imani Winds has led both a revolution and evolution of the wind quintet through their dynamic playing, adventurous programming, imaginative collaborations and outreach endeavors that have inspired audiences of all ages and backgrounds.  Their upcoming program is called, A Woman's Perspective and features the work of contemporary women composers, including Valerie Coleman, founder of Imani Winds.

The program will include:

The ensemble’s playlist embraces traditional chamber music repertoire, and as a 21st-century group, Imani Winds is devoutly committed to expanding the wind quintet repertoire by commissioning music from new voices that reflect historical events and the times in which we currently live. The New York Times said, “Imani Winds spices up Chamber Music with Global Flavors."

You can sample them in action HERE.

Imani Winds has six albums on Koch International Classics and E1 Music, including their Grammy Award-nominated recording, The Classical Underground. They have also recorded for Naxos and Blue Note and released Stravinsky’s Rite of Spring on Warner Classics. Imani Winds is regularly heard on all media platforms including NPR, American Public Media, the BBC, SiriusXM, the New York Times and the Wall Street Journal.

In 2016, Imani Winds received their greatest accolade in their 20 years of music making: a permanent presence in the classical music section of the Smithsonian’s National Museum of African American History and Culture in Washington DC.

Bring your own chairs and refreshments and enjoy live entertainment atop the Morris Museum’s elevated parking deck. Stunning sunsets, social distance, and glorious live music combine for a series of unforgettable evenings. Face coverings are required for patrons who are not fully vaccinated.