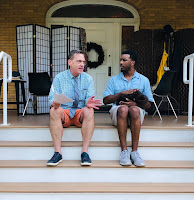 WHEN: Friday, August 27,and Saturday, August 28, at 6:30 pm, and Sunday, August 29, at 3:00 pm
WHERE: Martin Luther King Jr. Memorial Park next to the library on School Street, Metuchen
TICKETS: $10 and are available at the park.
The Metuchen performances are sponsored by the Metuchen Arts Council.

Popcorn Falls is a nonstop comedy about two small town officials who have a week to save their town, Popcorn Falls, before it is turned into a sewage treatment plant. The only way to do that is to put on a play, of course. Making it all the more challenging is that two actors play all of the townsfolk.

Popcorn Falls was written by James Hindman and was a hit Off Broadway. It stars Timothy (Tim) O’Connor as the mayor in charge of saving the town. Tim is a resident of Plainfield and an avid supporter of the arts. He is currently working as the Executive Director of DuCret School of Art. Since reigniting his love of acting a few years ago, Tim has appeared as Mr. Daldry in In the Next Room, the Governor in The Government Inspector, the Hostage in I Forgot to Worry, and Jeff on Death in San Francisco.

Playing Joe and countless other roles is Chris Grant of Linden. Chris has a Bachelor’s of Fine Arts from Kean University and is an Equity Membership Candidate. He played Darnell King in Brick City and received a Premiere Stages’ Senior Endeavor Award.