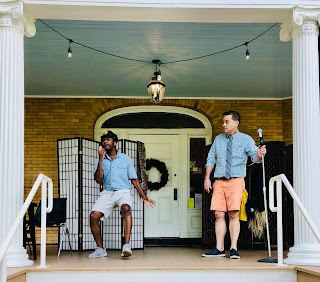 WHEN: Friday, September 3, at 6:30 pm, Saturday, September 4, at 6:30 pm, and Sunday, September 5, at 3:00 pm
WHERE: on the front porch of duCret School of the Arts, 1030 Central Ave., Plainfield. In case of rain, the performance will be inside the duCret auditorium.
TICKETS: $10 and will be available at the door or at ducret.edu/plays. There is ample parking at duCret.

Popcorn Falls is a nonstop comedy about two small town officials who have a week to save their town, Popcorn Falls, before it is turned into a sewage treatment plant. The only way to do that is to put on a play, of course. Making it all the more challenging is that two actors play all of the townsfolk.

Popcorn Falls was written by James Hindman and was a hit Off Broadway. It stars Timothy (Tim) O’Connor as the mayor in charge of saving the town. Tim is a resident of Plainfield and an avid supporter of the arts. He is currently working as the Executive Director of DuCret School of Art. Since reigniting his love of acting a few years ago, Tim has appeared as Mr. Daldry in In the Next Room, the Governor in The Government Inspector, the Hostage in I Forgot to Worry, and Jeff on Death in San Francisco.

Playing Joe and countless other roles is Chris Grant of Linden. Chris has a Bachelor’s of Fine Arts from Kean University and is an Equity Membership Candidate. He played Darnell King in Brick City and received a Premiere Stages’ Senior Endeavor Award.

Audience members are asked to bring their own chairs for outdoor performances. The show lasts 80 minutes without an intermission.

The Plainfield performances are part of duCret’s Porch Play Program, which is made possible in part by a 2021 HEART (History, Education, Arts Reaching Thousands) Grant from the Union County Board of County Commissioners. In addition, the performances are supported by a grant from the Edison Arts Society.