As the first production in Bernards Township’s “Plays in the Park” summer series, Trilogy Repertory Company will produce 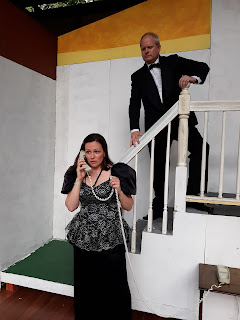 WHEN: July 30, 31, and August 5, 6, and 7, at 8 PM each evening
WHERE: the outdoor amphitheater at Pleasant Valley Park, Valley Road, in Basking Ridge
ADMISSION: free to the public, but donations to support this program, sponsored by the Bernards Township Department of Recreation, are gratefully accepted.

Patrons should plan to bring a lawn chair, blanket and a flashlight to enjoy a night of theater under the stars. Unvaccinated individuals are encouraged to wear a mask and practice social distancing. Please do not attend a performance if you are sick! Note: This play contains some adult situations and language. We have toned it down, but we are not encouraging young children to attend. (Above: Rick Brown of Verona listens disapprovingly to Alicia Harabin of Somerville on the phone)

Directed by Morristown’s Peter Curley, who is undertaking his first directorial role for Trilogy after fifteen years on the stage, and produced by Hank Barre of Basking Ridge, Rumors originally opened on Broadway at the Broadhurst Theater on November 17, 1988, and ran for 535 performances, winning a Tony Award for Christine Baranski as Best Featured Actress In A Play. In an interview with Mervyn Rothstein, written for the The New York Times, November 13, 1988, Neil Simon said: "'I was going through some difficult times...I wanted to work, because work is always a cathartic process for me, and I thought it would be really good just to get into a comedy.' He noted that, ”This is completely different for me...It's unlike anything I've ever written. It's my first farce.” The comedy opens with four couples arriving at the home of New York City’s Deputy Mayor  and his wife for a party.  They find that that there are no servants; the mayor’s wife is missing, and the Deputy Mayor has shot himself in the head.  The attendees decide it would be best for everyone to hide what has happened from the police. (Above, left: Corinne Chandler of Edison and Matt Marino of Bernardsville engage in an ongoing battle)

For further information call 908 204-3003 or go to the Trilogy Repertory website at www.trilogyrepertory.com.