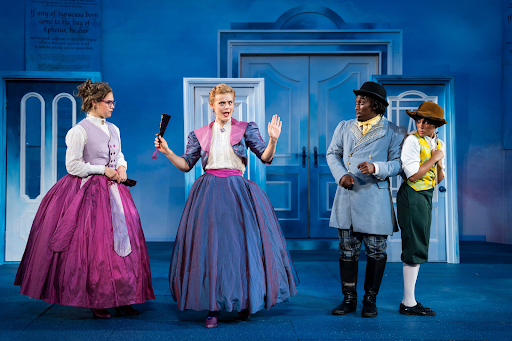 For the record, the last play I reviewed was a George Street Playhouse production on Saturday, March 14, 2020. By the 15th, I was quarantined and, for all intents and purposes, indoors for 15 months.

That’s why the Shakespeare Theatre of New Jersey’s current production of the Bard’s The Comedy of Errors was the perfect play to give me back my “sea legs” and ease me into the theatre once again. Its exquisite silliness and controlled chaos brought laughter back into my and the other audience members’ lives—and reminded us poignantly of just how much we had missed the shared communion of a play and the delight in stellar acting. (Above, Antipholus and his servant Dromio of Syracuse, meet Adriana, center, and her sister Luciana, who mistake him for Adriana's husband.)

Since 2001, this is the fourth production STNJ has mounted of The Comedy of Errors. I am sure that, when selecting a play for this abbreviated outdoor 2021 season, Artistic Director Bonnie J. Monte and Director Brian B. Crowe chose this screwball comedy to lift the spirits of the formerly quarantine audience.

Chaos ensues when long-lost twins, separated in infancy by a storm at sea, unknowingly end up in the same city and cross paths with each other’s friends and lovers. Inspired by an ancient Roman comedy by Plautus, Shakespeare complicates the plot even further, adding identical twin servants. One-liners, zingers and physical comedy abound, alongside some provocative, but subtle, notions about reputation, relationships and self-identity. The play brims with eccentric characters drawn from the lively world of commedia dell’arte, including a status-clinging goldsmith, a medieval doctor who attempts to exorcise one of the twins, a haughty courtesan and the mysterious and intimidating Abbess. 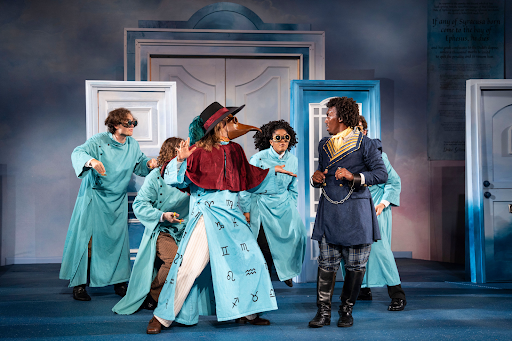 Adding even more to the general mayhem, Director Crowe has eschewed casing four actors as the two sets of twins. Because it’s difficult to get men who resemble each other so closely that they would be mistaken one for the other, he has wisely double cast two actors, Jeffrey Mark Alkins and Billie Wyatt, to perform the roles of both Antipholi (one of Syracuse and one of Ephesus) and their twin servants, both named Dromio, respectively. Costume designer Paul Canada helps pull off the ruse by dressing the two high-born twins in different color and style jackets and hats; the Dromios only change their caps. While it might seem confusing at first, after a short time the audience got the hang of it and reacted noisily whenever the “other” twin appeared. (Above: Dr. Pinch attempts to exorcise Antipholus of Ephesus, who is thought to have gone mad.)

To make it easier for the audience to focus on the general chaos, Baron Pugh’s scenic design is pretty spare (just as it would have been at London’s Globe Theater); it features eight doors in front of a double door—all painted in hues of blue and white—with clouds on the back wall of the stage. Props carried on and off help set the scene and let us know where we are at all times. I cannot comment on the lighting design as I attended a 5 p.m. performance, but Andrew Yoder’s sound design was atmospheric without being intrusive. It was on full view when the cast broke into spirited dancing in a flying machine interval whenever an airplane taking off from nearby Morris County Airport flew noisily overhead (which occurred about five times during the performance I saw). 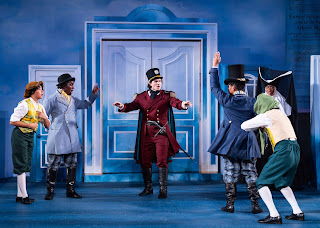 Jeffrey Marc Alkins is terrific as the Antipholus twins (above and left), especially when they react to being mistaken for one another. As the Ephesan Antipholus, he is the embodiment of righteous indignation at being locked out of his house, dunned for a gold chain he ordered but did not receive, and fears he’s losing his mind in this city of sorcerers, witches and madmen. He ably conveys the discombobulation felt by Antipholus of Syracuse, a recent arrival in the metropolis of Ephesus, who unexpectedly finds himself saddled with a wife, a creditor and a mistress, who all want something from him. Of course, it all comes to a head when the two sets of twins meet onstage in the penultimate scene; how Director Crowe pulls this off is nothing short of amazing (above). 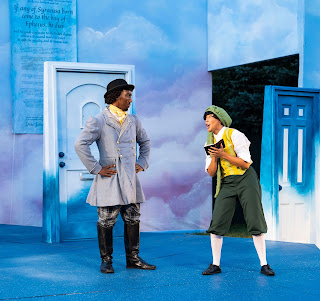 However, the heavy lifting of mistaken identity is pulled off by a delightful Billie Wyatt as the twin Dromios. As the more sober Dromio of Syracuse, Wyatt becomes unhinged upon discovering that he’s married to a spherical kitchen wench named Nell. In contrast, her goofy Dromio of Ephesus is equally dismayed to stand accused of stealing the money his master has supposedly entrusted into his care. Wyatt’s expressive face and great agility at physical humor brings down the house, especially when her character is accused of some crime he has not committed.

To boot, Wyatt engages in a great deal of physical humor as she energetically runs around the stage and up and down the amphitheater steps multiple times. I was exhausted just watching her. Best of all, she never breaks character as she sprinted up the steps!

Other actors doubled up in roles too, although they played different characters. As the noble twins’ Syracusan father, Dino Curia is appropriately spooked when threatened with arrest and death for even appearing in Ephesus. Isaac Hickox-Young’s haughty Duke Solinus tries multiple times, without much effect, to restore order. Rupert Spraul’s goldsmith is absolutely flummoxed when he realizes he’s been cheated out of his fee for providing Antipholus of Ephesus with a heavy gold chain as a gift for his wife. He’s even more hilarious as the medical quack Dr. Pinch, wearing a beaked plague mask (how appropriate) and uttering hocus-pocus spells to exorcise Antipholus of Ephesus, whom he considers to have gone mad. 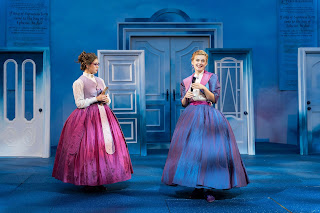 In supporting roles, Ellie Gossage (right) is very funny as Adriana, the wife of Antipholus of Ephesus, perplexed and devastated by the odd behavior of her husband. Katja Yacker (left) as her equally bewildered and beautiful sister Luciana is as luscious as her name suggests. Marcella Cox is a down and dirty courtesan, complete with deep décolleté, and an imperious Abbess wearing an outrageous headdress that will remind you of the Flying Nun. Anthony Paglia and Kirby Davis perform stand-up duty as merchants and Pinch’s assistants.

As Director Crowe aptly noted, “It is a rollicking, fantastical, fun farce, with an outrageous plot and colorful characters, yet for all its slapstick silliness, there is a beautiful message about reuniting with people from whom we’ve been separated and being with loved ones again. Its sweet and earnest ending could not be more apt for this reunion with our audience.” Amen. This stylish and joyous production is not to be missed.