WHEN: Sunday, July 11, at 3:00 pm
WHERE: Black Box Performing Arts Center, 49 E Palisade Ave in Englewood, NJ.
ADMISSION: This event is free to attend, with donations accepted benefitting the Black Box PAC. Reservations can be made HERE 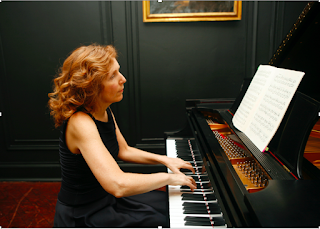 Carolyn Enger, concert pianist and speaker, has gained critical acclaim for her deeply felt performances and her thoughtful programs informed by a keen sense of history, identity, and personal connection. Ms. Enger has enjoyed remarkable success as a recording artist: The New York Times selected her Naxos recording of intimate Ned Rorem miniatures, Piano Album I & Six Friends, as one of the newspaper’s “Best In Classical Recordings” for that year, writing “Among the 90th-birthday tributes this year to the essential American composer Ned Rorem, this recording especially stands out,” while Gramophone declared, “Enger raises the miniatures to a higher level.”

Ms. Enger’s touring schedule has brought her to venues throughout the United States and beyond. Deepening her commitment to multimedia collaborations, Ms. Enger was part of renowned illustrator and writer Maira Kalman’s exhibit “Maira Kalman Selects” at the Cooper Hewitt Smithsonian Design Museum in New York, and her recording of Arvo Pärt’s music was featured in conceptual artist Mischa Kuball’s sound and light exhibit “res.o.nant” at the Jewish Museum Berlin.
Focusing on the era of World War II, her multimedia project The Mischlinge Exposé combines music, literature, and images that evoke the haunting memories of the Mischlinge—half-Jews and German-Jewish converts in Germany before, during, and after the Holocaust—events reflected in Ms. Enger’s own experience as the child of a Holocaust survivor. Ms. Enger’s project seeks to expand knowledge about the Mischlinge, and deals with her own conversions, issues of “racial purity” and identity, and how crippling discrimination is, societally and personally. Over the past seven years, Ms. Enger has presented this concert-lecture throughout the United States and Europe. Ms. Enger has contributed a chapter for the forthcoming book to be released in September 2021, Women Defying Hitler: Rescue and Resistance in Nazi Dominated Europe, 1933-1945.