Jewish Heritage Museum Presents Traveling Exhibit: From Malabar to Monmouth County: A Global Connection to the Jews of India 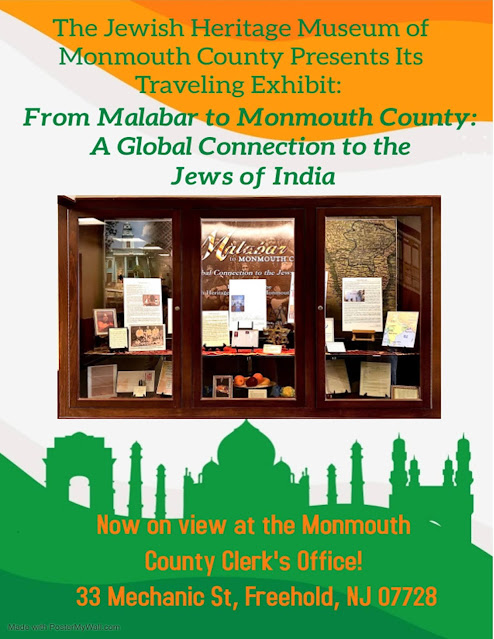 From Malabar to Monmouth County: A Global Connection to the Jews of India

WHEN:  The exhibit is on view until Tuesday, August 31, 2021, during the Clerk’s regular office hours: Monday through Fridays, 8:30 AM to 4:30 PM.
WHERE:  Monmouth County Clerk’s Office at Market Yard, 33 Mechanic Street, Freehold
ADMISSION: free
The JHMOMC encourages the public to view the full exhibit at the Museum by appointment only. For more information, please call 732-252-6990, email info@jhmomc.org, or visit http://www.jhmomc.org.
732-431-7324

Derived from the Museum’s current rotating exhibit, Jews of India: The History and Practices of the Bene Israel, Cochin, and Baghdadi Jews, this mini-exhibit tells the story of the three main Jewish Indian groups: Bene Israel, Cochin, and Baghdadi, their origins and impact on Monmouth County with family photos, a ceremonial Malida dish, and other selected artifacts supplementing the content. It explores the connection of the Jews of India to the United States through the story of Sophie and Yochanan Perry, the original donors of the exhibit.

The history of the Jews of India is complex and shrouded in mystery. Each of the three groups—Bene Israel, Cochin, and Baghdadi—has a different story of origin. The Bene Israel has been the largest of the groups, with an oral tradition that states that they are descended from seven couples who were the sole survivors of a shipwreck off the Konkan coast, south of Bombay.  Their arrival could date between the eighth century BCE and the sixth century CE. The Cochin and Baghdadi Jews arrived in India later and settled in different areas of the country.

This exhibit was prompted by the donation of books and artifacts by community members Yochanan and Sophie Perry. Their personal story was highlighted in the fall 2018 issue of the Museum’s newsletter, Heritage Highlights. Photographs, books, and objects are on display, including a 1965 first day cover showing the stamp honoring the Cochin Paradesi Synagogue, which houses a set of copper plates dating from 1000 CE, given to a Jewish leader from the Hindu ruler, outlining special privileges which would forever be granted to the Jewish community.

The Jewish Heritage Museum is located in the Mounts Corner Shopping  Center, at 310 Mounts Corner Drive Freehold, NJ, at the corner of Route 537 and Wemrock Road (between the CentraState Medical Center and Freehold Raceway Mall). It is on the second floor of the historic Levi Solomon Barn.

The JHMOMC is a tax-exempt organization under Section 501 (c)(3) of the Internal Revenue Code.  The Museum, now open to visitors by appointment with masks and vaccination, is handicapped and assistive-listening accessible.