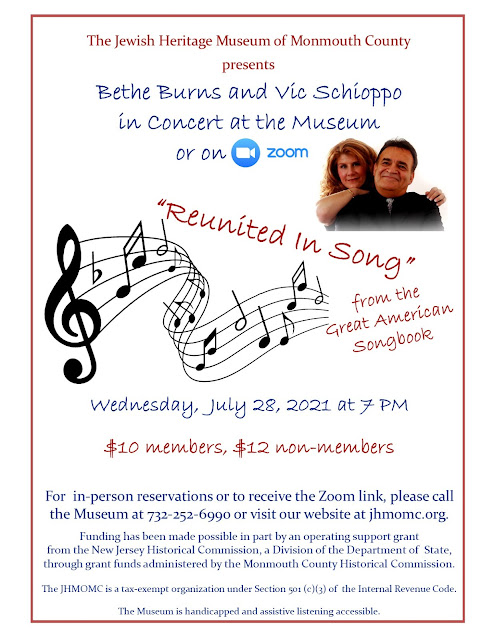 Bethe Burns and Vic Schioppo are happy to present wonderful and memorable music and share many favorite songs we have all come to love over the years. Bethe will explore and interpret great performances by Barbra Streisand, Eydie Gorme, Bette Midler, Melisa Manchester, and Vicki Carr, among others. In addition to providing all of the accompaniments, Vic will perform songs by Frank Sinatra, Billy Joel, and Michael Buble to name a few.

During this past difficult year, Bethe and Vic have created and performed Zoom concerts for many organizations throughout the United States. They have found this new undertaking to be most successful and enjoyable.

Bethe Burns studied at the American Musical & Dramatic Academy in New York City. Over the years, she has performed in cabarets and shows in New York, New Jersey and England. She and Vic created their "sophisticated duo" after meeting in 2010. Since then, they have been well received by all audiences who love the songs of the Great American Songbook.

Vic (whom everyone calls “Uncle Vic”) has been a nationally recognized singer/piano player for over 45 years. In addition to his cabaret experience, Vic has performed in, as well as conducted orchestras in over 20 community theatre productions. Over the last 11 years, Vic has enjoyed teaming up with Bethe as they present beautiful music!

The Jewish Heritage Museum is located in the Mounts Corner Shopping  Center, at 310 Mounts Corner Drive Freehold, NJ, at the corner of Route 537 and Wemrock Road (between the CentraState Medical Center and Freehold Raceway Mall). It is on the second floor of the historic Levi Solomon Barn. The JHMOMC is a tax-exempt organization under Section 501 (c)(3) of the Internal Revenue Code.  The Museum, now open to visitors by appointment with masks and vaccination, is handicapped and assistive-listening accessible.