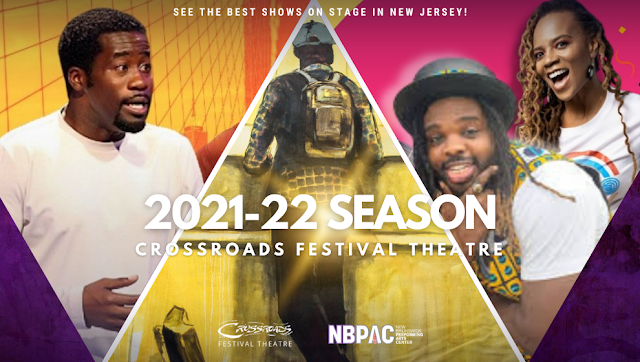 Crossroads will partner with theatre companies including Harlem’s New Heritage Theatre and The Market Theatre in Johannesburg, South Africa.

"Crossroads Festival Theatre elevates our company’s commitment to creativity in the development of new plays and new writers, deepening community engagement and the involvement of the theatre in the pressing conversations of our day, and establishing a sense of vibrancy in the celebration of what theatre is and can mean to its community,” said Ricardo Khan, Crossroads’ Co-Founder and Artistic Director.

In 1999 under the direction of Khan, Crossroads Theatre Company made theatre history by becoming the recipient of the Tony Award® for Outstanding Regional Theatre in America, a first for a Black organization in this country.

Emergency!’s precipitating event is the emergence of a slave ship from the depths of the Hudson River. The play, through its more than forty characters, all performed by Beaty, explores the depth and breadth of differing meanings of freedom across Black America.  Produced by the Crossroads Theatre Company and Voza Rivers' New Heritage Theatre Group of Harlem, these two major Black theatres are partnering again to co-produce. Emergency! was originally produced in 2006 at the off-Broadway Public Theatre in New York City.

The series kicks off with a launch party in honor of “Ready Set Go,” musician bass player and singer Divinity Roxx’s (former musical director for Beyonce) first album for young audiences.  She is a protégé of world-renowned bassist Victor Wooten.

Fyütch is a music and social justice artist who combines Hip-Hop and visual storytelling, and whose song “Women in History" went to #1 on Sirius XM Kids Place Live.

Other artists to be announced.

Other artists to be announced.

ABOUT CROSSROADS THEATRE COMPANY: In 1978, Ricardo Khan and the late Lee Richardson founded the Crossroads Theatre Company in New Brunswick, NJ as a place of creative expression, discovery and cultural pride, where trained black and brown artists could engage in substantive, non-stereotypical roles in the theatre, and where artists and craftspeople of all colors could work together for the good of art and community. Since then and with an enduring devotion to that foundational vision, Crossroads built a national reputation as an artistic home for some of the most important, transformative voices in the American Theatre, honoring Black culture, spirit and history, and giving voice to that experience in order that people of all backgrounds can meet, appreciate, discover and celebrate in a place of healing and joy- the Crossroads.