The Ballad of the Sad Cafe
adapted by Edward Albee from the novella by Carson McCulllers,
in special arrangement with the Dramatics Play Service, Inc.

Last summer, during the height of COVID-19 in 2020, these unshakable students gave the performance of a lifetime with their outdoor, completely socially distanced production of Blue Stockings by Jessica Swale. They performed in the parking lot of Ma'ayanot in Teaneck in early July.

This year, they are back and better than ever, ready to present their rendition of the classic Albee/McCuller's Southern Gothic in a professional theater while continuing to follow the appropriate safety guidelines to protect the health of the audience and performers. 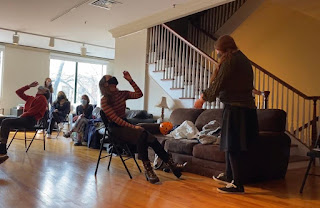 “Even though we were able to successfully put on a fully socially-distanced play last June, we had no idea what this year would bring and if we would be as lucky the second time around... Succeeding in presenting our show was a huge priority for us, and through incredibly flexible scheduling and changing rehearsal times, as well as through teamwork and motivation, we have been able to make it happen. We are so incredibly excited to see our hard work pay off, and we can’t wait for our audiences to see it as well!!!”- Meira Shapiro, Tech Director, ‘21

The play follows the tale of Miss Amelia Evans’ unique cafe and the 'drama' that revolves around its inception. When Amelia’s one-of-a-kind Cousin Lymon unexpectedly arrives, a group of colorful townspeople gather to relive the story of Amelia’s darkest secret-- her past love life. Set in small Georgian town in the early 20th century, The Ballad of the Sad Cafe leaves the audience on the edge of their seat as they embark on a journey of past and present to reveal the true story of Miss Amelia Evans.

"Once again, the Ma'ayanot Drama Society outdoes itself, with an entire end-of-COVID production that was chosen, cast, rehearsed, produced, ultimately presented by these remarkable young artists," explains Director Matt Okin. "Everyone at Black Box considers this group as the prime example of our ongoing collaborative theater work with teens."