ACL GALLERY TO FEATURE WORK OF THE LATE JOEL KRAUSE

The ACL Gallery is pleased to announce

A Retrospective of The Work of The Late Joel Krause

ACL Gallery features over 64 of Joel Krause’s paintings and sculptures. Joel attended the Newark School of Fine and Industrial Arts (NSFIA), and after that  immersed himself in the art world, working at the Newark Museum, and in NYC at the Metropolitan Museum of Art and the Museum of Modern Art.  Barbara Sax, President of the Arts Council of Livingston, states “Joel Krauss was a prolific and gifted artist who was greatly influenced by the art movements of the 50’s and 60’s. This show is an important retrospective of his lifelong exploration of color and form.” 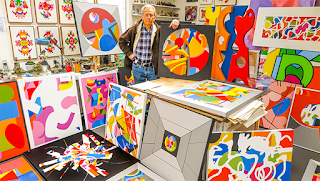 Joel Krause was influenced by the Impressionists, especially the Fauves with their use of vibrant colors. Other influences included Native American Art and Abstract Expressionism.  For several years he assisted the renowned sculptor Seymour Lipton. Joel was prolific and tireless, producing a huge body of work that has been featured in shows and other galleries as well as in the homes of many private collectors.

Bud Endress, a photographer whose work hangs in the Museum of Modern Art is a fellow NSFIA alumnus, and helped curate the show. "Joel is a one of a kind artist," says Endress. "Art was his life, and his life was art. This work belongs in a museum."