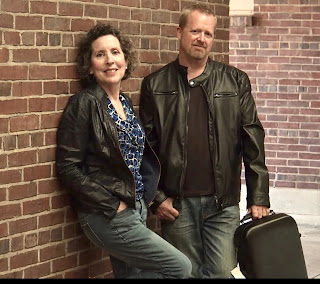 WHEN: Sunday, May 16, at 2 p.m. A post-performance, online discussion with the artists will follow the program.
WHERE: streamed live from RVCC’s Welpe Theatre.
TICKETS: The concerts in the MOZAIKA Concert Series are free of charge, but donations are accepted and will go to the RVCC Applied Music Fund to help the College’s music majors pay for private lessons on their primary instruments.

The concert also will be available for viewing after the initial performance date. For additional information about the concert or the MOZAIKA Concert Series, contact Anna Keiserman at anna.keiserman@raritanval.edu.
​

The Raritan Valley Community College (RVCC) Arts & Design department will present an afternoon of music for viola and piano. The virtual performance is the department’s next selection in a concert series launched to help defray the cost of private instructional lessons for RVCC music majors.

The concert will feature works by Georges Enesco, Stanley Grill and Carlos Franzetti; pieces by Cole Porter and George Gershwin, with arrangements by Carlos Franzetti; and music by Sergei Rachmaninoff, arranged by Allison Franzetti.

Brett Deubner has established himself as one of the foremost violists of his generation,  performing with orchestras on five continents. An advocate of 21st Century composers, Deubner has had over 50 viola concertos dedicated to him. He made his solo debuts during the 2019-2020 season with such orchestras as the Fort Wayne Philharmonic, the Portland Columbia Symphony, the Guayaquil Symphony in Ecuador, the Reading Symphony, the North Mississippi Symphony, and the Coastal Symphony of Georgia.

Pianist Allison Brewster Franzetti, the 2014 and 2018 Latin Grammy® Nominee for Best Classical Album and 2008 Grammy® Nominee for Best Instrumental Soloist without Orchestra, has received international acclaim for her virtuosity and musicality. Her performances include the live Latin Grammy® Awards television broadcast; the Grammy® Awards Classical Music Tribute to Earl Wild and Lang Lang; the American Classical Music Hall of Fame; the Campeche Festival in Mexico; and the opening of the VI International Festival of Music at the Teatro Colon in Buenos Aires. Brewster Franzetti is the piano soloist on the soundtracks of the American/Argentine film, Tango Fatal; the Argentine/French film; Ronda Nocturna; and the French/Spanish film, Dans le rouge du couchant.

The MOZAIKA Concert Series is made possible by funds from the Somerset County Cultural & Heritage Commission, a partner of the New Jersey State Council on the Arts.