NEW PROGRAMS FROM THE SMITHSONIAN 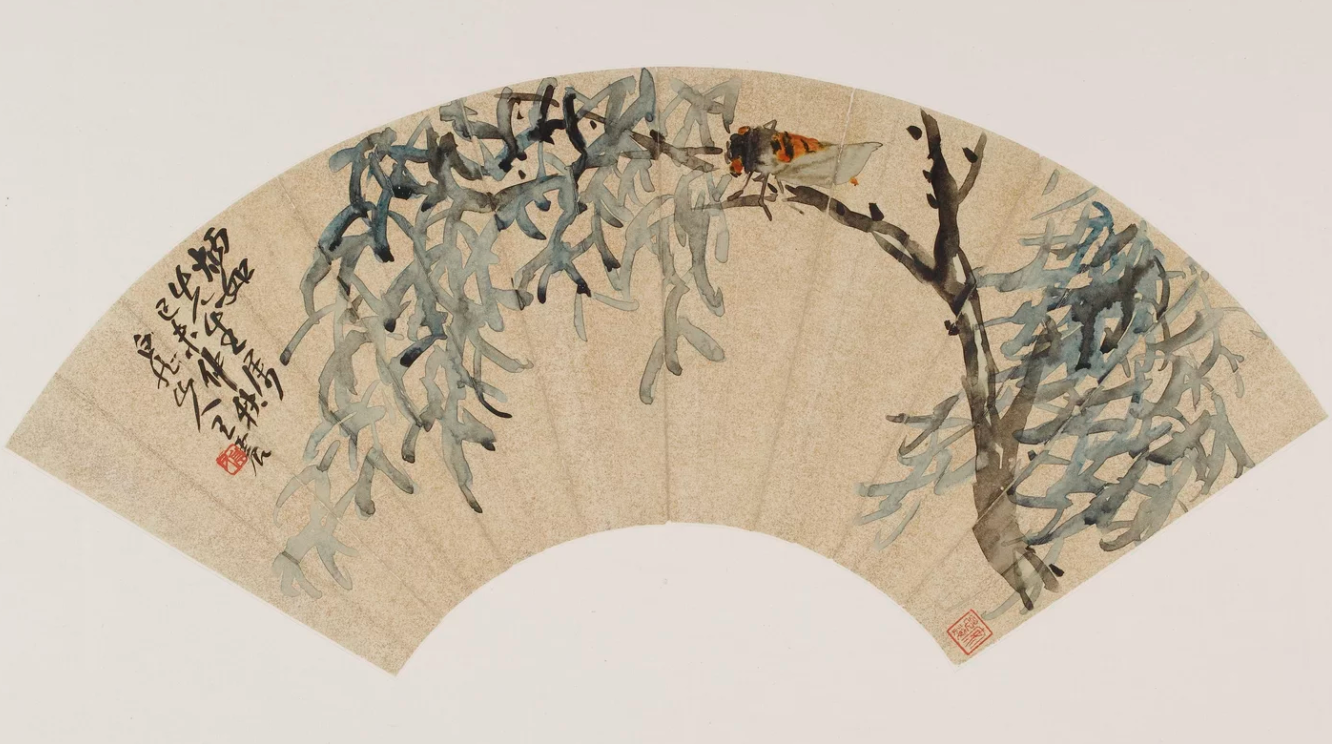 Though “Brood X” sounds like the perfect title for a horror film, it’s the name of some real-life invaders from below the earth: 2021’s global army of cicadas, one of the geographically largest of the dozen broods of 17-year cicadas that emerge in various years. NPR’s All Things Considered recently offered a report that placed the insect often seen as a dreaded pest in a very different context: as the source of inspiration for 4,000 years of exquisite Chinese art. Curator Jan Stuart of the Smithsonian’s National Museum of Asian Art commented to NPR that “they’re beautiful” in these depictions, with large eyes that symbolize visionary leadership and a life cycle that speaks to the power of transformation, making these spring visitors intermediaries between earth and heaven. She takes a closer look at the cicada’s role in Chinese culture in a beautifully illustrated blog post for the museum. (Image: China, modern period, 1919; fan mounted as album leaf; ink on gold-flecked paper. Gift of Robert Hatfield Ellsworth in honor of the 75th anniversary of the Freer Gallery of Art, F1998.222.2)
Learn More 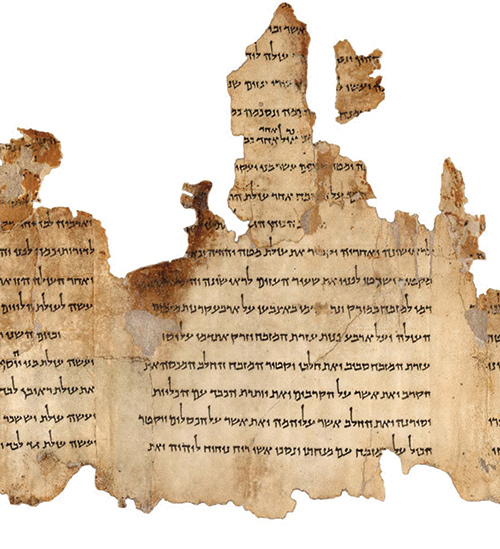 In March, Israeli archeologists discovered a new fragment of the Dead Sea Scrolls. The scrap of parchment found in the “Cave of Horror” is believed to be about 2,000 years old, and its Greek biblical verse matches a scroll called the Book of the 12 Minor Prophets that came to light 60 years ago.

The discovery of the Dead Sea Scrolls in the late 1940s and early 1950s forever changed the study of ancient Judaism and early Christianity. As additional documents surfaced and archaeological fieldwork continued, the understanding of these two religious traditions came into greater focus. The result is a radically new understanding of both Judaism and Christianity—and of the nexus between the two.
In a Wednesday, June 9, Smithsonian Associates Streaming program Dead Sea Scrolls scholar Gary Rendsburg describes the discovery of these precious fragments, what we know about their origins, the controversies surrounding them, and their influence on the development of both ancient Judaism and early Christianity. (Image: Temple Scroll, column 23, one of the longest of the Dead Sea Scrolls, 2nd century B.C.; The Israel Museum)
Register for the Program 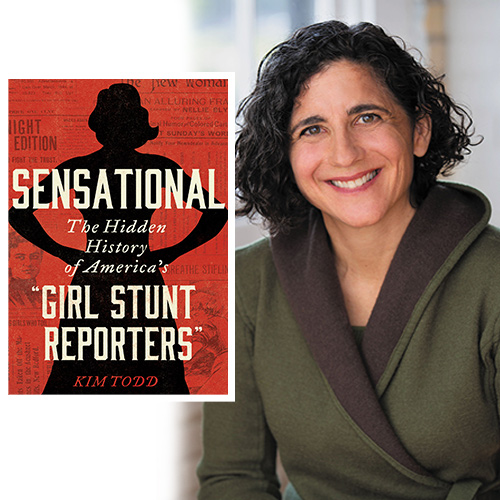 Nora Ephron once remarked that Katherine Graham’s “journey from daughter to wife to widow to woman parallels to a surprising degree the history of women in this century.” For the woman who held roles as the president, publisher, and CEO of the Washington Post across the span of 28 years, that journey encompassed a political and social history whose landmarks included the Vietnam War, the Pentagon Papers, Watergate, and Truman Capote’s Black and White Ball. The New York Historical Society’s exhibit Cover Story: Katharine Graham, CEO—opening this week and running through October 3—examines a transformative period in Graham’s life, as her devotion to the Post helped her grow from a self-effacing widow into an authoritative, decisive media executive.

A century before Graham, women struggled to enter the burgeoning news business, but some intrepid young women across the United States found a way to call attention to their reporting—and themselves. “Girl stunt reporters” risked reputation and their own safety to expose the hazardous conditions under which many Americans lived and worked. In various disguises, they stole into sewing factories to report on child labor, fainted in the streets to test public hospital treatment, and posed as lobbyists to reveal corrupt politicians. Inventive writers whose in-depth narratives made headlines for weeks at a stretch, these women changed laws, helped launch a labor movement, championed women’s rights, and redefined journalism for the modern age.

Drawing from her new book Sensational (Harper), Kim Todd returns their names to the front page in a Thursday, July 15 Smithsonian Associates Streaming program. She looks at the vivid history of the undercover reporters who exposed corruption and abuse in America—and in the process redefined what it means to be a woman and a journalist. Katherine Graham would have been proud.
Register for the Program 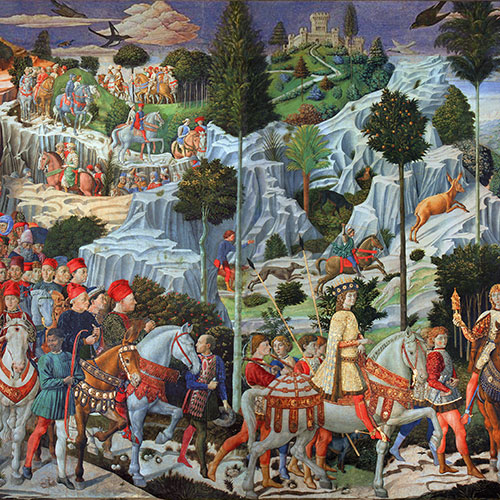 It wasn’t quite the spot that a Medici noble would covet, but an overlooked storeroom at the Uffizi Gallery turned out to be the location of a full-length fresco portrait of Cosimo II de’ Medici, Grand Duke of Tuscany. Discovered under a layer of plaster during a recent renovation, the fresco has been attributed to the circle of Mannerist painter Bernardino Poccetti and depicts the ruler towering over two female figures who act as allegories for the cities of Siena and Florence. The storeroom had another hidden treasure: a portrait of Cosimo’s father, Fernando I. Smithsonian magazine uncovers the details of the finds.

From relatively modest beginnings, the Medici became bankers to the pope and to many rich and powerful European families. But perhaps their most enduring legacy—for which the world owes them a debt of gratitude—is their patronage of the arts. Brunelleschi, Donatello, Fra Angelico, Botticelli, and Michelangelo all thrived under Medici patronage. In a Smithsonian Associates Streaming program on Friday, July 23 Renaissance art historian Elaine Ruffolo traces the family’s influence on the political, economic, and cultural history of Florence from the early 1430s with the rise of the dynasty under the near-legendary Cosimo de’ Medici, to the golden era under Lorenzo il Magnifico and the family’s ultimate goal: the papal tiara.
REGISTER FOR THE PROGRAM 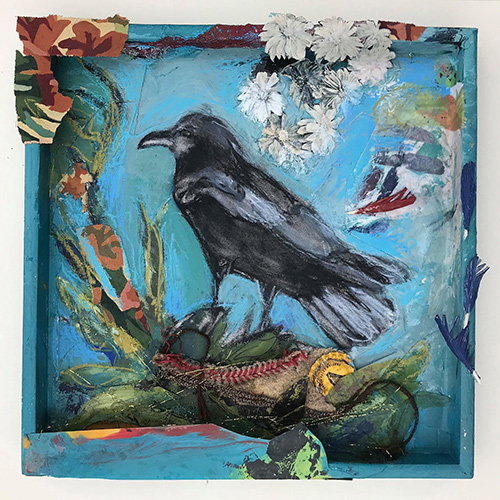 The lion is just one of the creatures sleeping tonight in the delightful new children’s book Jungle Night by popular author and illustrator Sandra Boynton. He’s joined by a snoozing chorus that includes a cheetah, crocodile, monkeys, frogs, birds, and other jungle residents whose nocturnal sounds create a distinctive soundtrack for dreaming. Boynton also has a human collaborator in the project: king of the classical cello jungle Yo-Yo Ma. They recently talked about their work together in a lighthearted Weekend Edition Sunday conversation with NPR’s Scott Simon. You can preview the book (which includes two audio downloads) and hear Ma perform Boynton’s “Jungle Gymnopedie No. 1” lullaby in a YouTube video.

If animals inspire the artist in you as well, explore the possibilities of collage, a highly versatile and accessible technique that results in the playful combination of various and sometimes-unlikely materials. A Smithsonian Associates Streaming studio arts course in creating collage and mixed-media works focused on animals and nature begins its six sessions on Wednesday, July 7. And if you dream about illustrating a children’s book, learn the basics from an illustrator and author who guides you in the process of interpreting a story through pictures in a two-session workshop that begins on Tuesday, July 13.
Collage and Mixed-Media: Animals in Nature
Children's Book Illustration