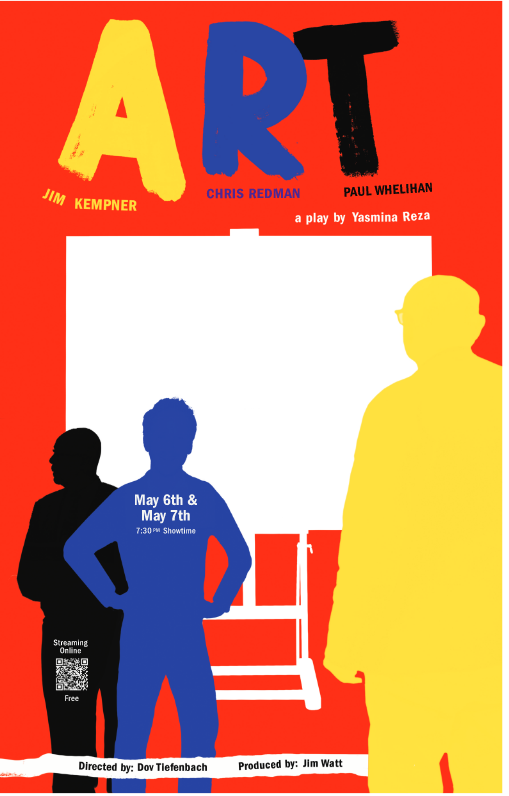 The production explores friendship, mortality, and, of course, art. The performance is free, yet welcome donations will benefit Pushcart Players, and the future live production.

“ART tells the comedic story of three long-time friends: Serge, Marc, and Yvan, whose relationship is put to the test when Serge purchases a completely modern painting,” said Jim Watt, producer. “The high-price purchase sets off a heated exchange about what constitutes ‘art,’ and quickly becomes more personal as the three resentfully bring up their individual failures. Will these friendships be forever destroyed?”

“We’re excited to present this reading. The virtual streaming with actors in remote locations (New York, New Jersey, Canada, Los Angeles) has allowed us to perform a wonderful script in an alternative medium full of creative opportunities.”

The cast features Paul Whelihan as Marc, Jim Kempner as Serge, and Christopher Redman as Yvan.

Jim Kempner is an actor who also specializes in contemporary painting, sculpture, photography, and work on paper, with an emphasis on contemporary master prints and outdoor sculpture (https://www.jimkempnerfineart.com/). Kempner’s inventory appeals to the established as well as beginning collectors. They work closely with art advisors, designers, corporations, and museums to expand and enrich their varied collections.

Christopher Redman is an award winning actor, writer, and producer. As an actor he has appeared in over a hundred TV and film productions including the latest season of Genius : Aretha as Clive Davis opposite Cynthia Erivo. Recently he's been seen in the Netflix Original hit series Workin' Moms where he played "Brad" throughout season 2, God Friended Me for CBS and is currently in production on the thriller series The Old Man for FX with Jeff Bridges and John Lithgow. Christopher is the subject and producer of the lifelong docu series The Decades Project which explores how friendship evolves over long periods of time. He is also a producer and comedy writer for the Webby Award winning podcast company Kelly&Kelly out of Vancouver.

Pushcart Players Pushcart Players is NJ’s premiere touring theater company specializing in arts education for children. Twice nominated for an Emmy©, Pushcart is the recipient of numerous state and private awards for excellence and innovation. Founded in 1974, Pushcart brings substantive musical theater, workshops, and residencies to young people in schools and theaters nationwide. The company has traveled more than 2.5 million miles nationally and abroad, from the rural red schoolhouse to the nation’s White House.

“I am very grateful to have the opportunity to explore this terrific play with an exceptional team of artists,” said Paul Whelihan. “I am even more grateful that these efforts will benefit Pushcart Players’ mission to uplift ART in all its forms.”