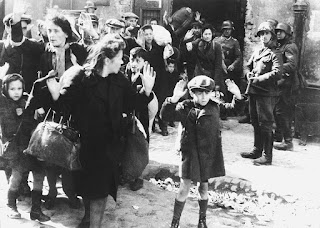 WHEN: Monday, April 19 at 1 pm EDT
WHERE: on the Congress for Jewish Culture YouTube channel and through www.congressforjewishculture.org/videos

Each April 19th, the Congress for Jewish Culture, along with Friends of the Bund, Jewish Labor Committee and Workers Circle, has organized a gathering of musicians, academics, and survivors and their families at the stone in the Warsaw Ghetto Memorial Plaza in Riverside Park.

This annual event marked the anniversary of the Warsaw Ghetto Uprising, the single greatest instance of Jewish armed resistance to the Holocaust, with an academy remembering the victims and fighters of history's greatest crime. In 2020, due to the COVID-19 pandemic, they did not gather there for the first time in living memory, but instead held their event online. Of course, they hope and pray that next year they will all once again be able to convene at Der Shteyn (the stone) in Riverside Park.

An impressive array of artists has been assembled to remember the victims of the Nazi war on European Jewry and commemorate their resistance. This year marks the 78th anniversary of the Warsaw Ghetto Uprising. 13,000 Jews were killed during the revolt (some 6,000 among them were burnt alive or died from smoke inhalation). Of the remaining 50,000 residents, almost all were captured and shipped to concentration camps or killing centers.

The upcoming program, including music and readings, will feature

Founded in 1948, the Congress for Jewish Culture (Executive Director, Shane Baker) is a secular organization based in New York City dedicated to its longstanding commitment to enriching Yiddish culture worldwide. They are joined as organizers for the virtual ceremony by Friends of the Bund, Jewish Labor Committee, Workers Circle, the California Institute for Yiddish Culture & Language, Montreal Worker’s Circle, and the YIVO Institute for Jewish Research.

*Maida Feingold will sing "Shtil di nakht,” which was written by Hirsh Glik, a young poet in the Vilner ghetto. Glik also wrote the words to “Der Partizaner himen” (The Hymn of the Partisans [resistance]). He was murdered by the Nazis, but his songs are well remembered in the Yiddish community. (Maida Feingold conducted a popular sing-along series on radio station WEVD in New York, along with Zalmen Mlotek, and made numerous appearances on WEVD's Sunday Forward Hour. She has also toured the United States with a troupe of Yiddish theater artists headed by Ben Bonus and Mina Bern.)

Mir Kumen On Yiddish Choir of the Jewish Labour Bund Melbourne will sing both Hirsh Glik’s “Partizaner Himen” and "Di Shuve" (The Oath) by Sh. Anski (author of The Dybbuk).