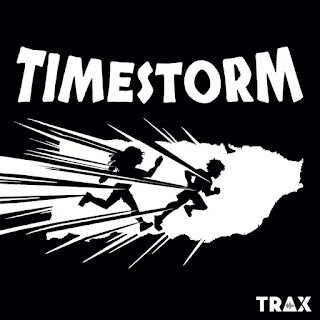 WHEN: Tuesday, April 27. New episodes will be available weekly on Tuesdays.
WHERE: TimestormSeries.com, TRAX.fm, KidsListen.org, Apple Podcasts, and on listening platforms where podcasts are available. Cocotazo Media offers free resources for Timestorm at cocotazomedia.com/timestorm-resources.
TICKETS: free

Timestorm, a fiction podcast about twelve-year-old twins who travel in time to find Puerto Rico’s true history, will launch its third season.

The Timestorm podcast series—named one of the top trendsetting podcasts from 2020 by School Library Journal—follows the Ventura twins from Newark, New Jersey, who are yanked into another dimension where they meet a distant cousin who gives them an extraordinary mission: witness, find, and remember overlooked figures and events from their culture’s past.

Also new this season for audiences, Timestorm has launched a series of Apple Maps guides allowing listeners to explore the paths that the Ventura twins take throughout the series. Learn more about the first guide—Explore NJ’s Lenape Trail—here. Additional map guides will be released throughout season three.

“We’re proud to present the third season of Timestorm in partnership with the TRAX podcast network from PRX, which offers free high-quality, inclusive content for preteens and teens,” said Dania Ramos, Timestorm’s creator and member of the Cocotazo Media creative team. “In season three, the Ventura twins hunt for sacred artifacts in a thrilling cross-island adventure that takes them from the ruins of a lighthouse to towering heights in a tropical rainforest.”

Timestorm is a member of TRAX from PRX, a podcast network for 9-13-year-old audiences featuring programming that entertains, empowers, and educates. The series is written and directed by Dania Ramos with sound design and original music by Michael Aquino. Andrew Siañez-De La O also writes for the podcast.

Cocotazo Media, based in Bloomfield, NJ, creates audio content by independent artists of all backgrounds. Founded by Michael Aquino and Dania Ramos, Cocotazo Media produces the award-winning podcast Timestorm in partnership with TRAX from PRX. Michael Aquino is a sound designer, audio engineer, and musician. He has released two solo albums, Giants Will Fall and City Stars (Cocotazo Music). Dania Ramos is a writer and educator. She’s the author of the middle-grade books Ignacio in the Dark and Who’s Ju? (Northampton House Press).