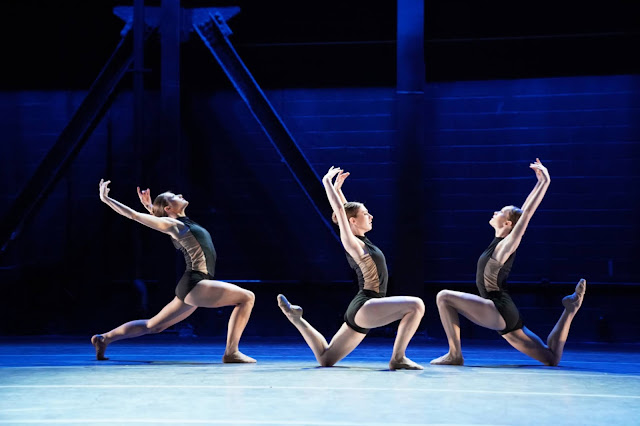 American Repertory Ballet will kick off its 2021 Digital Spring Season on April 23 with a series of original ballets. These new works will be available to local and global audiences, in the comfort of their homes.

The three pieces featured are all world premieres, each created between January – March 2021. Dancers rehearsed in designated “pods” while choreographers worked both in-studio and over Zoom.

“With strict safety protocols in place, conditions were less than ideal or familiar” said Julie Diana Hench, Executive Director. “But the experience of being able to work together again inspired a sense of joy, hope, gratitude, and newfound creativity.”

This month, these new works by Ryoko Tanaka (Saudade), Colby Damon (Strange Sentience), and Amy Seiwert (World, Interrupted) were filmed onstage at the New Brunswick Performing Arts Center where dancers, staff, and crew followed CDC, state and local health and safety guidelines, in addition to a rigorous COVID-19 testing schedule. Each piece is being released separately, with artist interviews, rehearsal footage, and behind-the-scenes content, and will be available to stream for 10 days.

A Platform for Emerging Artists

In 2020, when performances were cancelled due to the pandemic, ARB artists continued working at home, outdoors, wherever possible. The dancers created a short film called repeat that highlighted their many talents, from videography, to film editing, choreography - and music composition. Haley Wright, who was then a member of ARB2, is an accomplished pianist and had written a piece that the dancers used for this project.

“As ARB planned to step back into the studio and onstage, the idea of creating a new work that reflected on shared experiences over the past year seemed like an interesting and relevant way to launch our 2021 spring season,” explains Hench.

Tanaka and Wright were invited to create a new work together, their first professional commission. “ARB is very interested in giving a platform to new and emerging artists, a commitment that will continue to grow in many ways under the leadership of Ethan Stiefel, ARB’s Artistic Director Designate,” added Hench.

TICKETS:  $10 per program or $25 with the purchase of a Pass to view all three ballets.
For tickets, visit arballet.anywhereseat.com.

The Choreographers
R. Colby Damon was born and raised in Richmond, Virginia and received his early dance training at Richmond Ballet, Boston Ballet, and Virginia School of the Arts. Throughout his 12 year performing career, he danced professionally for Sacramento Ballet, The Metropolitan Opera Ballet, Mark Morris Dance Group, Northwest Dance Project, and BalletX among others. As a choreographer, he has received commissions from Nashville Ballet, American Repertory Ballet, BalletX, Sacramento Ballet, Pennsylvania Ballet II, Nashville Ballet II, Ballet West Academy, Bryn Mawr College, and DeSales University among others, and his work has been performed at festivals in Brazil, Mexico, Bermuda, and New York City. He additionally has extensive experience teaching dance to a wide array of ages and abilities, from professional company dancers, to pre-professional conservatory students, to public elementary school children, and aged populations. He is currently working as a freelance choreographer and dance teacher throughout the USA and beyond.

Amy Seiwert enjoyed a nineteen-year performing career dancing with the Smuin, Los Angeles Chamber, and Sacramento Ballets. As a dancer with Smuin Ballet, she became involved with the “Protégé Program,” where her choreography was mentored by the late Michael Smuin. She was Choreographer in Residence there upon her retirement from dancing in 2008 until 2018. Named one of “25 to Watch” by Dance Magazine, her first full evening of choreography was named one of the “Top 10” dance events of 2007 by the SF Chronicle. Other awards include a Bay Area IZZIE Award for Outstanding Choreography and a “Goldie” from the San Francisco Bay Guardian. Her ballets have been supported by the National Endowment for the Arts, The Kenneth Rainin Foundation, ODC Theater, Yerba Buena Center for the Arts, and the Joyce Theater in New York City. Seiwert’s ballets are in the repertory of Ballet Austin, BalletMet, Smuin, Washington, Atlanta, Oakland, Sacramento, Colorado, Louisville, Cincinnati, Carolina, Oklahoma City, Milwaukee and American Repertory Ballets as well as Imagery, Robert Moses KIN and AXIS Dance. Seiwert served as Artistic Director of Sacramento Ballet from 2018-2020.

Ryoko Tanaka was born and raised in Japan, where she began her training. In 2013, she was selected to be in the Nancy Einhorn Milwaukee Ballet II program, where she performed in Michael Pink’s Romeo and Juliet, and Nutcracker. In 2017, she joined the trainee program at American Repertory Ballet and soon moved up to ARB 2. In 2018, she was promoted to the first company. Since joining the company, Ryoko has performed the title role in Giselle, Nutcracker (including Sugar Plum Fairy, Snow Queen and other lead roles), Airs by Paul Taylor, Blue Until June by Trey McIntyre and multiple other roles. This is her third season with ARB. Saudade marks her first commission for the company.

American Repertory Ballet's mission is to bring the joy, beauty, artistry and discipline of classical and contemporary dance to New Jersey and nationwide audiences and to students through artistic and educational programs. Founded as the Princeton Ballet Society in 1954, the organization now comprises: the preeminent professional classical and contemporary ballet company in the state; Princeton Ballet School, one of the most established non-profit dance schools in the nation; and ARB's Access & Enrichment initiatives, including the long-running and acclaimed DANCE POWER program. In 2021, ARB welcomes its new Artistic Director, Ethan Stiefel. To learn more, visit arballet.org.