REVIEW: GEORGE STREET PLAYHOUSE'S BAD DATES IS THE PERFECT WAY TO GET BACK TO THE THEATER—WITHOUT LEAVING HOME 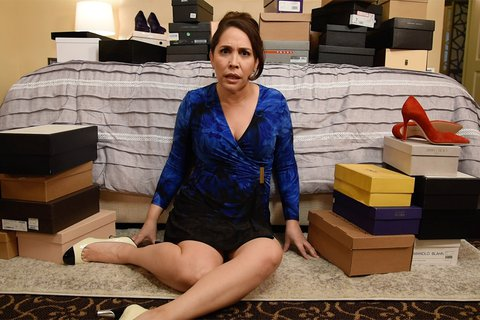 With George Street Playhouse’s Conscience the last show I reviewed, on Sunday, March 15, just before the pandemic quarantine began, it’s rather fitting that the first play I review as vaccinations get underway is Bad Dates, George Street Playhouse’s first offering of the 2021 season—only this time, it’s a virtual performance, not one onstage in the New Brunswick Performing Arts Center!

This one-act, one-woman comedy by the most Broadway-produced female playwright of our time, Theresa Rebeck (Art, Seminar, Mauritius), takes us on a 90-minute rollercoaster ride through dating world of 40-something divorcee Hayley Walker, who regales us with details of her pathetic social life as she dresses for and returns from a series of bad dates.

Talking nonstop as she changes a myriad of outfits and tries on shoes (her bedroom is crammed with shoeboxes and discarded high heels), Hayley reveals her impulsive, quick to judge personality, along with deep insecurity about who she really is. Is she 13-year-old Vera’s mother, who’s now ready to date? A “restaurant idiot savant” who excels at running a Romanian restaurant when her boss goes to jail for money laundering? A staid matron in a dress with a mid-calf skirt or a femme fatale in a red one-shoulder slinky number? And what’s up with that shoebox full of cash?

Andréa Burns’ Hayley is a Texas firecracker, talking nonstop and bouncing from bedroom to bathroom to closet and down the hall to ask advice of her teenage daughter as she anxiously prepares to meet several different men—all of whom turn out to be as awkward at facing the middle-aged social scene as she. One is a Buddhist weirdo who talks to bugs; another is a “snotty, mean” Columbia Law professor who won’t even explain what kind of law he teaches because he considers her too stupid to understand; and still another reveals TMI about his cholesterol and irritable colon!

Of course, none of these men ever appear onstage; all we get is Hayley’s accounts of what happened. But what saves this rather slight and often repetitive comedy is the growth of Hayley’s character as she endures disappointment after disappointment. The rather annoying, insecure girl-woman (a self-described “ding-a-ling”) of the opening scenes becomes more confident and willing to look past first impressions as the play draws to a close. Burns pulls off this metamorphosis so smoothly that we are as surprised as she by the time she has her final epiphany.

Peter Flynn directs Burns (his wife!) with a steady hand, showcasing her great comedic timing but never letting the jokes get in the way of the character’s emerging humanity. Lisa Zinni’s costumes perfectly telegraph Hayley’s insecurity about who she is, and the shoes (she claims to have 600 pair) are to die for.

The play was performed at the home of a George Street Playhouse board member, which really gives the production a sense of verisimilitude. And filming it like a movie (Hudson Flynn is the cinematographer)—instead of through a Hollywood Squares Zoom grid—adds an intimacy we might not encounter viewing it in a theater.

Theresa Rebeck’s Bad Dates might not be a ground-breaking, earth-shaking piece of playwrighting, but its humanity and close attention to what goes on when two people go on a date—at least, from one person’s point of view—makes for good night at the theater! That’s my favorite kind of date!

Bad Dates is available for viewing through March 14th. Tickets for each play are $33 per household and are on sale through georgestreetplayhouse.org/events. For information on subscription packages, phone 732-659-0377.