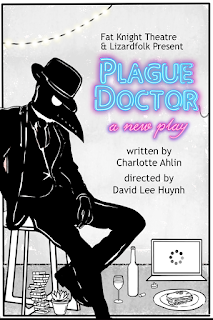 WHEN: March 18th – 21st
WHERE: The SoHo Playhouse
TICKETS: $25
www.stellartickets.com/o/soho-playhouse/events/plague-doctor

This is *not* a Zoom play! This is a LIVE theatrical performance, filmed and streamed directly from the Soho Playhouse to your computer screen! With real people and everything!

It’s an ordinary night in for roommates Cosmo, Casey, Roz, and Filomena. They bicker over chores, surf Netflix, and fend off the medieval Plague Doctor who haunts the corners of their apartment. But tonight, they’ve found a new way to relieve the monotony: a storytelling contest with perilous stakes. As they spin their tales, genres weave together and fictional worlds spring to life—and the good Doctor wants in.

PLAGUE DOCTOR is an irresponsibly loose retelling of The Decameron, co-produced by Fat Knight Theatre and Lizardfolk.

Please support the young artists who are giving their all for the return of live theatre!