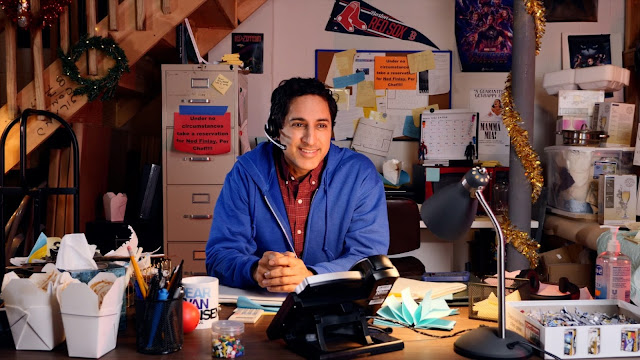 The hilarious one-act play features 40 diverse characters, all played by Pancholy, follows a day in the life of Sam, an out-of-work actor who mans a red‐hot reservation line at Manhattan’s trendiest restaurant that receives outrageous calls from high-maintenance patrons who will stop at nothing to secure a reservation. Coercion and bribes are just beginning! Amid the barrage of calls, Sam has to deal with non-stop harassment from the chef and his own personal problems. The question is, can he deal with it all?

"I'm so grateful to everyone at George Street Playhouse for finding innovative ways to make theater during this pandemic. Working with David Saint was an absolute thrill, said actor Maulik Pancholy, we had so much fun putting this together, and I'm excited to share it with the final character in any play...the audience!"

Maulik Pancholy is an award-winning actor, author and activist.

He is best known for his comedic turns on television playing Jonathan on NBC’s critically acclaimed 30 Rock, Sanjay on Showtime’s Weeds, and Neal on NBC’s Whitney. His recurring and guest starring roles include the upcoming Only Murders in The Building, The Good Fight, Dynasty, Elementary, Star Trek: Discovery, Friends from College, The Good Wife, Web Therapy, The Comeback, and others. He is the voice of Baljeet on Disney’s Phineas and Ferb and the title voice of Sanjay on Nickelodeon’s Sanjay and Craig. On Broadway, Pancholy starred in Bess Wohl’s Grand Horizons and Terrence McNally’s It’s Only A Play. Off-Broadway and other New York credits include Good for Otto (The New Group), Guantanamo: Honor Bound to Defend Freedom (The Culture Project), Aunt Dan & Lemon (The New Group), The Awake (59E59), India Awaiting (Samuel Beckett Theater) and The Happy Sad (SPF at The Public). He has worked regionally at The Studio Theatre, Shakespeare Theater Company, Yale Rep, Shakespeare Festival Los Angeles, The Goodman, and the Mark Taper Forum. Film credits include 27 Dresses, Hitch, Friends with Money and several independents.

A longtime advocate for the Asian American and Pacific Islander (AAPI) and LGBTQIA+ communities, Pancholy was appointed by President Barack Obama to serve on the President’s Advisory Commission on AAPIs. As a Commissioner, he helped launch the anti-bullying campaign ActToChange.org, an organization which he continues to chair today. Act To Change is now a national nonprofit dedicated to ending bullying for AAPI youth and fostering a world where all young people can celebrate their differences.

Pancholy can also be seen in the upcoming Hulu series Only Murders in the Building, The Good Fight, The Good Wife, Phineas and Ferb, and Web Therapy.

Under the leadership of Artistic Director David Saint since 1997, and Kelly Ryman, Managing Director since 2013, the Playhouse produces groundbreaking new works, inspiring productions of the classics, and hit Broadway plays and musicals that speak to the heart and mind, with an unwavering commitment to producing new work. As New Brunswick’s first producing theatre, George Street Playhouse became the cornerstone of the revitalization of the City’s arts and cultural landscape. With its 45-year history of producing nationally renowned theatre, the Playhouse continues to fill a unique theatre and arts education role in the city, state and greater metropolitan region.

Founded by Eric Krebs, George Street Playhouse, originally located in an abandoned supermarket on the corner of George and Albany Streets, was the first professional theatre in New Brunswick. In 1984, the Playhouse moved to a renovated YMCA on Livingston Avenue, and in 2017 took temporary residence in the former Agricultural Museum at Rutgers University during construction of its new home.

The Playhouse has been well represented by numerous productions both on and off-Broadway. In 2018, George Street Playhouse was represented on Broadway with Gettin’ the Band Back Together which premiered on the Playhouse mainstage in 2013.  American Son, produced by George Street Playhouse in 2017, opened on Broadway in 2018 starring Kerry Washington and Stephen Pasqual, and will appear on Netflix.  Other productions include the Outer Critics’ Circle Best Musical Award-winner The Toxic Avenger. In 2015, It Shoulda Been You opened on Broadway and Joe DiPietro’s Clever Little Lies opened off-Broadway.  Both shows received their premieres at the Playhouse. Others include the Outer Critics Circle, Drama Desk and Drama League nominated production of The Spitfire Grill; and the Broadway hit and Tony and Pulitzer Prize winning play Proof by David Auburn, which was developed at the Playhouse during the 1999 Next Stage Series of new plays.

In addition to the mainstage season, the Playhouse’s education department provides extensive programming for children, youth and adults. Partnering with administrators and educators throughout New Jersey, the Playhouse provides unique education experiences that both reinforce classroom curriculum and investigate issues such as bullying, diversity, immigration, health and wellness, and the rising epidemic of opioid addiction.

George Street Playhouse programming is made possible in part by funds from the New Jersey State Council on the Arts/Department of State, a partner agency of the National Endowment for the Arts. Grant funding has been provided by the Middlesex County Board of Chosen Commissioners through a grant award from the Middlesex County Cultural and Arts Trust Fund.