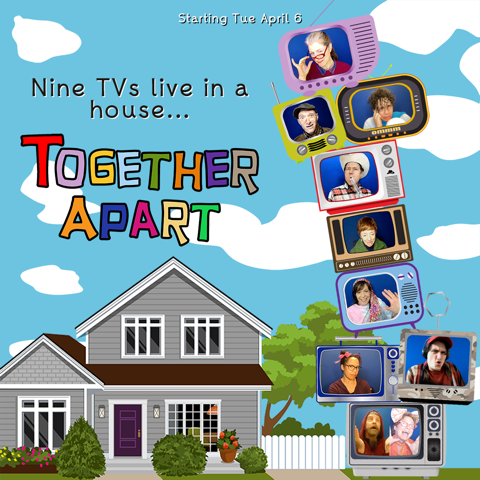 WHEN: beginning Tuesday, April 6; weekly through May 11
WHERE: Facebook and other social media channels, and through the website
TICKETS: free, although donations are appreciated

Dreamcatcher Repertory Theatre, in residence at Oakes Center at 120 Morris Avenue in Summit, will release the original web series Together Apart, featuring its resident acting ensemble.

Together Apart is the comic brainchild of Dreamcatcher member Dave Maulbeck (Maplewood), and is written by Maulbeck and David Lee White (Bordentown). With production design by Jeff Ertz (Madison) and graphic design by Yolanda Fundora (Summit), the series hearkens back to sitcoms of the 80s and 90s. An oddball collection of characters lives together in a house run by Mrs. Garrett, the possibly benign den mother of the group. Residents include an alien, a detective, a cowboy, a monk and many others, but all characters are merely heads on television screens. Each episode contains a different adventure, replete with mishaps and mayhem.