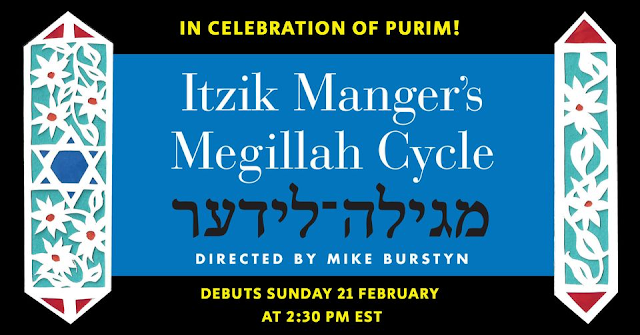 WHEN: This exciting new production will kick off 2021’s Purim week this Sunday, February 21, at 2:30 pm EST
WHERE: on the Congress for Jewish Culture's YouTube channel, where it will remain indefinitely.
For more information, visit CongressForJewishCulture.org.

MEGILLAH CYCLE comes on the heels of their inaugural production of The Dybbuk, which premiered on December 14th to unanimous rave reviews led by The Forward calling it “Mesmerizing! One of the best theatrical productions I’ve seen since the lights went out on Broadway!”

In 1936, the enfant terrible of Yiddish literature, Itzik Manger, published a cycle of poems shattering time and history by updating the Biblical story of Queen Esther to Eastern Europe of the 20th century. In 1965, with music by Dov Seltzer and under the direction of Shmuel Bunim, the Family Burstein opened a musical production of the cycle that opened a bright new chapter for Yiddish in Israel and would eventually find its way to Broadway’s Golden Theatre in 1968. The original cast recording of The Megilla of Itzik Manger was released by Columbia Records.

Now, Mike Burstyn, star of the original musical production, has adapted Manger's poems and is reprising his original roles as the Interlocuter and the master tailor Fanfose. The New York Times praised Burstyn’s “considerable young charm and talent that adds to the evening’s fun!” He will also be tackling his late father Pesach Burstein's turn as the drunken King Akhashveyresh. The international troupe of Yiddish theater players fills out the cast to lighten your pandemic Purim!

MEGILLAH CYCLE will be presented in Yiddish with subtitle translation, and features interspersed English commentaries written by the late Joe Darion (Man of La Mancha). Scenic design is by Adam Whiteman, with original music, editing and technical supervision by Uri Schreter.

Founded in 1948, the Congress of Jewish Culture is a secular organization based in New York City dedicated to its longstanding commitment to enriching Yiddish culture worldwide. Executive Director Shane Baker is serving as producer for this undertaking in association with Mariella Productions, the League for Yiddish and Toronto Workmen's Circle.