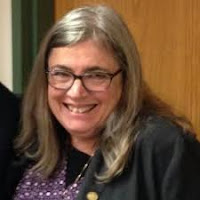 The latest result of the Centenary Stage Company’s Women Playwrights Series made its world premiere in a socially-distanced Sitnik Theater at Centenary’s Lackland Center on Feb. 25.

While it was strange to sit in the Sitnik at less than half capacity and surrounded by yellow caution tape, the unusual circumstances didn’t take anything away from Darrah Cloud’s Turning.

Turning in this case is a term for gymnastics that this reviewer had to look up. Turners were members of German-American gymnastics clubs called turnverein. The clubs existed from the early 19th Century and helped German immigrants assimilate in the New World. 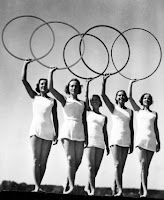 These “turners” were three young women on their way to Germany. They were the first US Olympic Gymnastic Team.

Women in sports were pretty much invisible until Babe Didrikson, one of history’s best all-around athletes, burst onto the scene in the early 1930s.

Cloud was commissioned to write a play about some resident of Hackettstown and, when she discovered Ada Lunardoni, she also found just how little information exists on women in athletics.

When she did find out more about Lunardoni, she realized her story is an immigrant’s tale. Here is a young woman remembering her voyage west from Italy. Remembering coming through Ellis Island in her Easter dress. Now, she is sailing back to represent her adopted homeland during a time of Depression and upheaval.

Today, we think of Olympic athletes traveling across the country to train as almost a full-time job. These young women had regular jobs, Ada was a seamstress and had to train after work in backyard gyms in Newark. These women knew their sport was not going to lead to fortune. It didn’t even lead to lasting fame. Cloud had to talk to Lunanrdoni’s family and the families of the other athletes to fill out their stories.

One particular anecdote stuck with her and formed the basis for the play.

When Americans today think about the 1936 Olympics, they think of Jesse Owens.

At the Olympics Hitler believes would showcase the superiority of the Aryan race, Owens won four gold medals. A bad day for the Nazis, to say the least.

The anecdote Ada Lunardoni told her grandchildren is the basis of the second half of this one-act play, and it is the best reason to see it.

Much of the play involves the three young women at the Captain’s Ball on the ship, pointing out the young men they wish would ask them to dance, obsessing over their routines, complaining about having to wear high heels.

Ada and Jennie are Italian, and they let you know it: loud, occasionally semi-profane and very much girls of their time. The third teammate, Mary, is Irish Catholic and still emotionally under the thumb of the nuns who educated her.

The girls punctuate their discussions with cartwheels, flips and splits, as well as with rather a lot of gin. 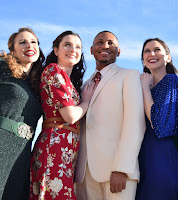 Taylor Congdon is Ada. She’s believably a Jersey girl who works hard and plays hard and says what she thinks. Ally Morgstrom is Mary Wright (Centenary Stage regulars will recognize her from Hitler’s Tasters). She plays the timid, ridden-with-Catholic-guilt “turner” with precision. Emily Williams is Jennie Caputo, who may or may not be gay (queer in the jargon of the day). Her tough act is performed really well. (Right: Ally Borgstrom as Mary, Taylor Congdon as Ada, Deonté Griffin-Quick as Jesse Owens, and Emily Williams as Jennie. Photo credit  Christopher Young.)

The only other character is Deonte Griffin Quick’s Jesse Owens. He spends the early portion of the play running on the deck and silently noticing the girls, sometimes with quite a bit of curiosity. But later, he becomes an integral part of the crossing and the play.

All the actors were perfectly cast—and not just because of their athletic prowess. The three women interact flawlessly, and Quick is believable as the athlete Owens.

The set is spare compared to previous Michael Imhoff designs. It’s the deck, with a rail, lights and chairs. But it fits the show flawlessly, as Imhoff’s sets always do.

The gymnasts talk a lot about wanting to dance with the male athletes, and eventually, they dance to choreography by Director Lea Antolini-Lid with an assist from local ballroom dance instructor Joshua Belverio. The elegant dance moves that don’t interfere with the dialogue.

Almost everything at CSC is worth seeing, but Turning is particularly relevant. It not only tells the story of a former Hackettstown resident whose life is unknown to most people there but it also tells a story about how society has changed. And some ways it hasn’t.

The show runs through March 7.  For information and tickets, go to http://www.centenarystageco.org.

NOTE: This review has been updated on March 3, 2021, to reflect the role of Lea Antolini-Lid as the production's choreographer with an assist from ballroom dance coach Josh Belverio.