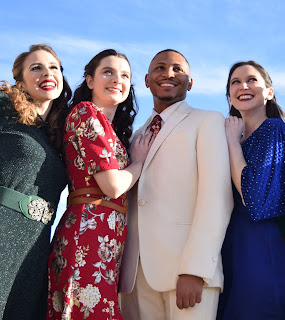 WHERE: in the Sitnik Theatre of the Lackland Performing Arts Center, 715 Grand Ave., Hackettstown
TICKETS: from $25.00 to $27.50 for adults with discounts available for seniors, students and children under 12. Tickets for the Live Stream are $10.00 per access link.
For more information or to purchase tickets visit centenarystageco.org or call the box office at (908) 979–0900.

Turning is the story of a group of scrappy young women from Newark, NJ who began to train in backyard gyms for what would become the experience of a lifetime, the controversial 1936 Berlin Olympics. Inspired by the real-life stories of Hackettstown Resident and 1st Women’s US Gymnastics team member, Ada Lunardoni and team members Consetta Caruccio, Jennie Caputo, Margaret Duff, Irma Haubold, Marie Kibler, Adelaid Meyer, and Mary Wright, playwright Darrah Cloud weaves their accounts together with the memoirs of Jesse Owens bringing to vibrant life this story once lost to history.

Turning also tells part of the story of the famed track athlete, Jesse Owens. Owens, an African American defeated Hitler’s “Aryan Supermen” and became a “hero” to the people of Berlin for disproving Hitler’s theory of race superiority. Jesse Owens’ triumph at the Olympics was heralded by both the German and American people, but history often forgets that he was the son of two sharecroppers from Alabama, and the grandson of Slaves. After confounding Nazi racial theories at the Berlin Olympic stadium, it was hurtful to return to his homeland and find clear signs of similar attitudes. He once said, “When I came back to my native country, after all the stories about Hitler, I couldn't ride in the front of the bus. I had to go to the back door. I couldn't live where I wanted. I wasn't invited to shake hands with Hitler, but I wasn't invited to the White House to shake hands with the President, either." Owens even had to take a service elevator to a reception at the Waldorf Astoria being held in his honor because he wasn't allowed to walk in the front door of the hotel, and was not invited to the White House or even congratulated by then president, FDR, unlike his white teammates who received a special presidential reception. Jesse Owens tells part of his own story in Turning as he travels with the young women from New Jersey. Many aspects of the play have been inspired by his Memoirs of his time as an Olympian, which the creative team read when researching the history of Turning. Centenary Stage Company is proud to open this production during Black History Month, to promote the stories and struggles of historical African Americans like Jesse Owens.

Centenary Stage Company offers a variety of special ticket offers and discounts in conjunction with the production of Turning. Thursday evening performances offer patrons a buy one/get one rush ticket special. The BOGO offer is only valid for in-person sales at the CSC box office beginning at 5:30 PM on the night of the performance and is not available for advance ticket sales on-line or over the phone. Centenary Stage Company also offers a special Hackettstown Resident pricing for the Wednesday, March 3 2:00 PM performance, available for purchase at the door only with proof of ID.  Finally, Centenary Stage Company offers a special $5.00 Student Rush Ticket available to students from any school for any Friday evening performance with a valid student ID. $5.00 Student Rush Tickets are only available in person at the CSC box office on the day of the event and not available for advance ticket sales, on-line or by phone.

Centenary Stage Company’s World Premiere production of Darrah Cloud’s Turning is sponsored in part by The House of the Good Shepherd and Home Instead Senior Care. It is presented in collaboration with the New Jersey Theatre Alliance and the NJPAC Stage Exchange.

Centenary Stage Company remains committed to the health and safety of our community and adheres to all requirements set forth by the State of New Jersey including, but not limited to; observing social distancing, limited capacity, and requiring masks or facial coverings. For more information regarding CSC COVID-19 policies visit centenarystageco.org/faq.

The box office is open Monday through Friday from 1 – 5 PM and two hours prior to every performance. The Centenary Stage Company box office is located in the Lackland Performing Arts Center at 715 Grand Ave. Hackettstown, NJ on the campus of Centenary University.  Centenary Stage Company can also be found across social media platforms; Facebook, Instagram and Twitter. Like and follow to receive the latest in CSC news and special offers.