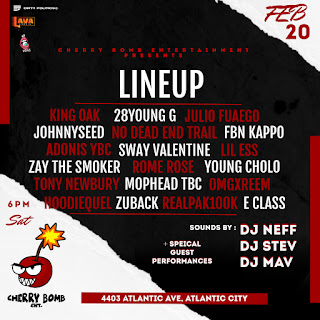 Axel Castillo, a 20 year old entrepreneur from Atlantic City NJ, has launched a talent showcase, in conjunction with Dirty Politics Studio & Apparel. The event includes music artists of various genres from the tri state area. Judges include Billboard recording artist Lovari, among others.

Under the umbrella of his Cherry Bomb Entertainment promotional team, the event, a mere few blocks from the Atlantic Ocean seashore, will include some of Atlantic City's established artists on the scene, along with artists from the tri state area. The event will be held at Dirty Politics Studio & Apparel (4403 Atlantic Avenue), an independently owned recording studio and clothing boutique, helmed by Jersey Shore natives Benjamin "Benji" Howard and Deron "Strandz" Leggete. This event will be the first of several by Mr. Castillo that will be produced throughout the year.