When live theater paused, the Zazzali Sisters, Eva and Valentina, did not let that stop them doing what they love, acting, singing and dancing!

Both are cast in 2 Streaming Events of The Drowsy Chaperone presented by Broadway Theater Workshops this weekend. 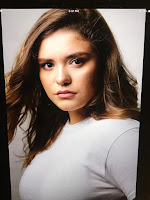 With the houselights go down, a man in a chair appears on stage and puts on his favorite record: the cast recording of a fictitious 1928 musical.

The recording comes to life, and The Drowsy Chaperone begins as the man in the chair looks on.  Mix in two lovers on the eve of their wedding, a bubmling best man, a desperate theatre producer, a not-so-bright hostess, two gangsters posing as pastry chefs, a misguided Don Juan and an intoxicated chaperone, and you have the ingredients for an evening of madcap delight.

Eva Zazzali (above) will play the role of Kitty, is in the Green Cast,  that performs on Saturday, January 23rd, at 7pm. Get tickets HERE.

Her sister, Valentina Zazzalli (right) will play the role of The Drowsy Chaperone in the Yellow Cast that performs on Sunday, January 24th, at 2pm. Get tickets HERE.