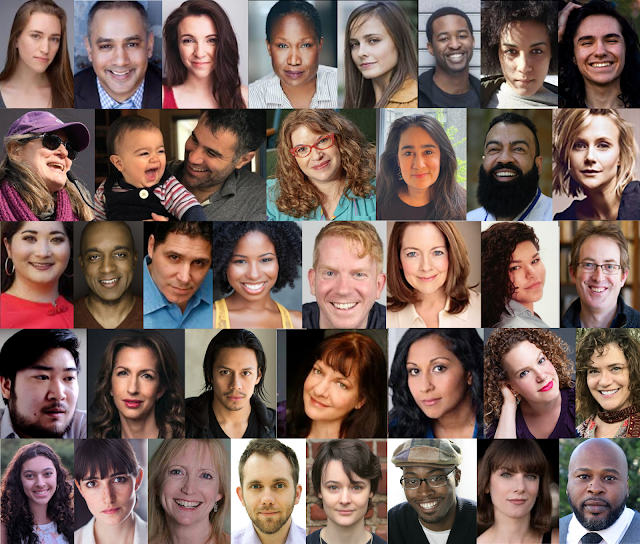 Originally intended to be staged throughout New Jersey communities, the Voting Writes Project pivoted to an online format with the onset of COVID-19. This allowed Luna Stage to share the stories on a larger scale than previously imagined; the project features work by 37 artists and has been viewed virtually by over 10,000 people.

“It was truly a privilege to collaborate with artists across the country in building and telling these stories in advance of the 2020 presidential election,” said Artistic Director Ari Laura Kreith, who conceived the Voting Writes Project and facilitated its creation over the course of six months.

Activists, writers, directors, filmmakers, actors and musicians met weekly over Zoom to share personal stories, questions and research around voter engagement and disenfranchisement. This process informed their work as they created pieces 31 distinct pieces exploring civic participation, ranging from a short play set in a dystopian Zoom breakout room, to a documentary film about voting for the first time after incarceration, to a song cycle about voting rights and suppression.

"These stories are revelatory and emboldening," said Maxim Thorne, Managing Director of The Andrew Goodman Foundation, who collaborated with Luna Stage on the project's development.

“The virtual nature this project allowed Luna to deeply engage its mission of sharing local and global stories in a time when we are forced to be physically apart, and to continue bringing communities together for conversations that create understanding and change,” said Kreith.

Luna commissioned six world premiere plays for the project. In Jenny Lyn Bader's My First Time, three stories of political initiation interwoven over 6 decades echo across time and span generations. Rachel Shapiro Cooper's interview-based Another Number in the Pool explores the reasons people don't vote; Amanda Sage Comerford’s Florida! is a fantasia inspired by letters written to voters in swing states; and Bernardo Cubría's The Breakout Room follows non-voters trapped in a Zoom reality. Two solo pieces round out the offerings: Rajesh Bose's solo conversation When They Go Low examines race in America; and Kaela Mei-Shing Garvin’s Count Me In documents voters who learn their ballots were not counted.

Modeled after Woody Guthrie’s Dust Bowl Ballads, writer Jim Knable’s Songs of Suffrage shares history lessons about voting rights and repression, alongside the artist’s personal experiences. The 9-song cycle concept album is accompanied by a series of music videos by filmmaker Joey Yow, showcasing the debut track “Don’t Wait” along with other songs from the album.

Voting Rights films include Teens Talk Voting, based on interviews with teenagers all over the country, and The Power To Vote, a documentary about Boris Franklin registering to vote for the first time after incarceration and reflecting on what voting means to him. These films chronicle voters’ real-life experiences and emotions, and are directed by Maggie Borgen, the latter in collaboration with Ari Laura Kreith and Turron Kofi Alleyne.

The Voting Writes Project was created in collaboration with the Andrew Goodman Foundation with support from the National Endowment for the Arts.