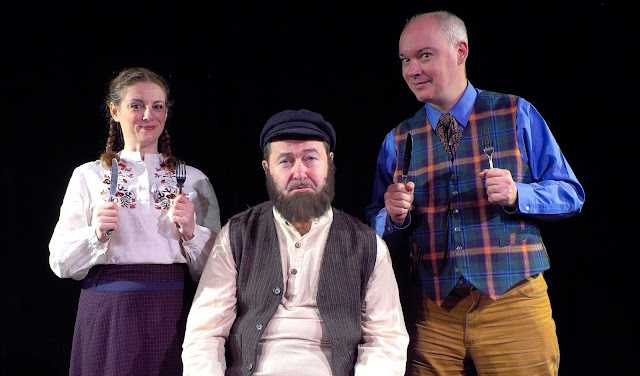 WHEN: Thursday at 7:30 pm, Friday & Saturday at 8 pm, and Sunday at 2 pm
WHERE: Sitnik Theatre at the Lackland Performing Arts Center, 715 Grand Avenue in Hackettstown, NJ.
TICKETS:  range from $22.50 to $27.50 for adults with discounts available for seniors, students and children under 12. Thursday evening is a Buy One Get One rush ticket special when purchased at the box office beginning at 5:30 PM.
Tickets and more information are available online at centenarystageco.org or by calling the box office at (908) 979-0900.

Find out what happens to the beloved characters in Fiddler on the Roof after the musical ends. TEVYE SERVED RAW is an evening of Sholem Aleichem material, with adaptations of his Tevye stories (“What, Me Worthy?” and “Get Thee Gone!”), scenes from his own long-unseen Yiddish stage version, and three of his purely comedic stories, newly adapted (“Strange Jews on a Train,” “The Yiddish Sisyphus” and “A Stepmother’s Trash-Talk”).

TEVYE SERVED RAW will feature the original New York cast: Allen Lewis Rickman and Yelena Shmulenson (the Yiddish-speaking couple from the Coen brothers’ A Serious Man) and Shane Baker (“the best-loved Episcopalian on the Yiddish stage today”). The production is performed in English and Yiddish with English supertitles. Unlike several recent Yiddish-language productions, the cast of TEVYE SERVED RAW are all authentic speakers of the language.

"We have tremendous fun doing the comic stuff, but the 'Tevye' material is something else entirely," said Rickman, who is also the show's director. "It's a revelation to people who only know Fiddler on the Roof. Fiddler is a superb musical – one of the best ever – but they had to dilute the material to make it acceptable to a mainstream audience in 1964. And look, Bock and Harnick and Stein are brilliant musical theater guys, but they grew up in America, which is a very different place from Tsarist Russia.

What we did is go back to the source. What's in our show is what Sholem Aleichem, who was there in the shtetl and saw it all himself, actually wrote. It's his words, his observations, unfiltered, ‘raw’. We're doing adaptations of his original stories plus scenes from his own stage version of Tevye. A few of the plot points are also in Fiddler, but we do them as Sholem Aleichem wrote them, without the compromises they had to make for Broadway.

It's a question of authenticity. If people want to get a sense of where most American Jews actually came from, this is the real deal. The characters in our show are the people that were there, not exaggerations from musical comedy."

TEVYE SERVED RAW has been in development for over four years and has been performed in New York City, Los Angeles; Kiev, Ukraine; Toronto; and Massachusetts, among other places. In 2018, the production played to ecstatic acclaim in Romania, where it was presented with Romanian supertitles at the State Jewish Theater in Bucharest.

Yelena Shmulenson was born in Belarus, raised in Ukraine and emigrated to the US in 1993. She’s perhaps best known as the icepick-wielding Dora in the Coen brothers’ Oscar-nominated Best Picture A Serious Man. Other film & TV credits include “Orange is the New Black,” “Blue Bloods,” “Madame Secretary,” “The Knick,” “Boardwalk Empire” (as Mrs. Manny Horvitz), “Chicago Med,” The Good Shepherd, Romeo & Juliet in Yiddish, and Chinese Puzzle. Stage credits include The Golem of Havana (Miami New Drama), The Essence: A Yiddish Theater Dim Sum (Fringe/tour), two seasons at the Ellis Island Theatre, Covers (New York/St. Petersburg/Moscow/Montreal), etc. She won three Earphones Awards for her recorded books and is fluent in five languages.

Shane Baker appeared Off-Broadway in Sholem Asch’s God of Vengeance, in his solo show The Big Bupkis! A Complete Gentile’s Guide to Yiddish Vaudeville (co-written and directed by Allen Lewis Rickman), The Adventures of Hershele Ostropolyer (with Mike Burstyn), The Megile of Itzik Manger, Everett Quinton’s staging of Charles Ludlam’s Conquest of the Universe or When Queens Collide, and in his own Yiddish translation of Beckett’s Waiting for Godot for the play’s Yiddish world premiere, and tours to Enniskillen, Ireland and Paris, France. The New York Times called his translation “even more depressing than Beckett’s original.” In 2016 he toured the world with programs commemorating the 100th anniversary of the death of Sholem Aleichem, sharing stages with Itzhak Perlman and Chava Alberstein. Shane spent several seasons with Jeff Weiss in his serial And That’s How the Rent Gets Paid / Hot Keys / Come Clean and assisted director Doug Hughes in his Obie-award winning direction of The Grey Zone.

One of the most beloved writers of Yiddish literature, Sholem Aleichem’s work inspired the hit musical Fiddler on the Roof. Sholem Aleichem (Solomon Rabinowitz) was born in Pereyaslav, Ukraine, and moved as a child with his family to Voronkov, a neighboring small town which later served as the model for the fictitious town of Kasrilevke described in his works. One of his first stories appeared in a Yiddish paper under the pseudonym “Sholem Aleichem” which in Hebrew means "Peace be unto you." From this time on, this became his pen name. He wrote stories, sketches, critical reviews, plays, and poems in both verse and prose. His immense popularity did not decline after his death in 1916 but rather increased beyond the Yiddish-speaking public. His works have also been translated into most European languages, as well as Russian and English. His plays and dramatic versions of his stories have been performed by the top Yiddish and Hebrew theatrical companies in America, Israel, Russia, Poland, and many other countries.