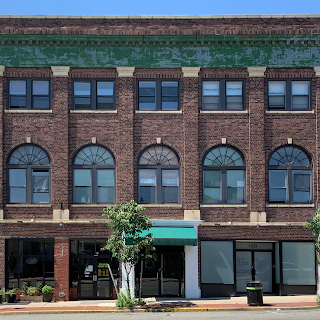 Vanguard Theater Company began renovations this week at what was once the Old Mogul Theater at 180 Bloomfield Avenue, and what will soon be the Vanguard Institute for the Performing Arts (V.I.P.).

Over the next two months, Vanguard will transform the 4,000 square foot space, which houses the oldest proscenium theater in Montclair, into a renovated theater and event rental location offering a sophisticated atmosphere in the heart of downtown.

Once complete, the space will offer a main theater, 2 studios, a sound/lighting booth, four restrooms and a finishing kitchen.

These will be available for Vanguard’s ongoing programming and also for other theater groups that lost their home once the Westminster Arts Center stopped renting to groups outside of Bloomfield College. 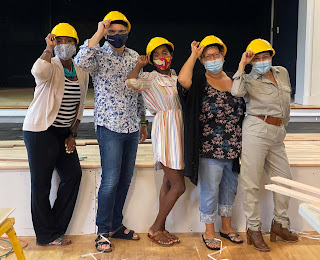 “We signed our lease on March 1, 2020, just before the COVID-19 outbreak. Now that we are finally able to get into the building to start renovations, we look forward to creating a beautiful space for artists and event planners, and being a part of the rich cultural life and diversity of Montclair,” says Janeece Freeman Clark, Artistic Director of Vanguard Theater Company.
The renovations will include a new HVAC and ventilation system, and the studios will be configured to allow socially distanced arts education with limited numbers of students under strict social distancing and CDC guidelines. Classes begin on October 5, 2020 and will include in person, virtual, and hybrid classes in acting, musical theater, dance, on camera acting, and more. Registration opens on Monday, August 31, 2020. Notably, Vanguard will offer a Broadway Buddy series - featuring artists from their Broadway Buddy Mentorship Program - which will offer classes to students on pre-professional tracks.

Vanguard’s Broadway Buddy Mentorship Cabaret aired on Thursday, August 13th as a one night only benefit for The Actors Fund. The production featured student mentees from Montclair and surrounding towns performing virtual duets with acting mentors hailing from Broadway shows such as Frozen, Hamilton, Hadestown, Dear Evan Hansen, Ain’t Too Proud, Waitress, The Lion King, Beautiful: The Carole King Musical, Aladdin, and more!
In his introduction to the event, Lin-Manuel Miranda said:
Vanguard Theater Company, producer of this cabaret, is based in Montclair, NJ.  The company is close to my heart because, not only is it just an incredible company, but my nephew Dylan was a part of their education program in their recent production of the Wiz of Oz... It was an incredible production and I will never forget it.The Broadway Buddy Mentorship program exemplifies Vanguard’s mission of Diversity, Reciprocity, Education, Activism & Mentorship, providing a one-on-one relationship with a Broadway Artist to talented youth from diverse backgrounds. Because of COVID, Vanguard wanted to use the concert to give back to the theater community, because Reciprocity is such a big part of Vanguard’s mission of DREAM.
The Broadway Buddy Cabaret performance raised nearly $10,000 for The Actors Fund’s COVID-19 emergency relief efforts.
To learn more about Vanguard Theater Company, see a video tour of the new space, view Lin-Manuel Miranda’s introduction, and more, please visit https://www.vanguardtheatercompany.org.
ABOUT VANGUARD THEATER COMPANY
Vanguard Theater Company is a 501(c)3 not-for-profit producing original, collaborative and re-imagined works of theater. Committed to changing the narrative through theater dedicated to DREAM: Diversity, Reciprocity, Education, Activism & Mentorship, Vanguard is committed to color-conscious casting, and professional artistic mentorship. Vanguard Theater Company's year-round programming is made possible through generous support from the New Jersey State Council on the Arts, TeeRico by Lin-Manuel Miranda, Investors Bank, collaborations with Montclair Film and other community partners, and the generosity of many individual donors.
For more information about Vanguard Theater Company and its programs, please visit www.VanguardTheaterCompany.org or call 973.632.2523. For the most up-to-date news and information, follow @VTCNJ on Facebook, Instagram, Twitter, and YouTube.