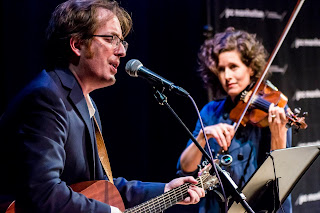 from Songs of Suffrage—Part of The Voting Writes Project

Additionally, a full album release event will be held as a live stream concert through Rockwood Music Hall and Luna Stage on Tuesday, September 29 at 8pm.

Luna Stage announces the live stream release of single “Don’t Wait” From Jim Knable’s forthcoming concept album Songs of Suffrage, with other songs from the album to be released live on subsequent Tuesdays until November. This free live performance is part of Luna Stage’s Voting Writes Project, a two-month interdisciplinary arts event featuring commissioned plays, films, a virtual dance party, and other interactive experiences celebrating civic engagement ahead of the November 2020 election.

In Songs of Suffrage, Knable conjures a wide range of characters, from the girl who grew up having her "Family Garage" as the local polling station, to the first-time registered voter coming into a new understanding of himself ("Fire in the Sky"). Along the way, listeners will contemplate the challenges of Mandela's South African election ("Election Rehearsal"), witness Lincoln's initiation of voting by mail ("Stanton to Lincoln"), and confront the brutal truths of voters who gained then lost suffrage ("Ladies of New Jersey"). Jay Buchanan, bass player for Jim Knable & The Randy Bandits, contributes instrumentals and album engineering to Songs of Suffrage.

Modeled after Woody Guthrie's Dust Bowl Ballads, the nine songs on the album share short history lessons about voting rights and repression alongside songwriter Jim Knable's personal exploration of his own relationship with voting.

Starting September 8, Luna will showcase a new track accompanied by a live streamed performance each Tuesday leading up to the election. The entire album will be available for streaming and downloading in October.

“Song of Suffrage fuses Jim’s encyclopedic knowledge of American History with his playwright’s imagination and eclectic musical voice,” says Luna Stage Artistic Director Ari Laura Kreith. “With each song, I found myself singing along and then realizing that I’d learned something I never knew before. This album invites us to understand our place in the American voting tradition, and the sweep of our country’s voting history.”

Don't Wait, the first single off Songs of Suffrage, had its genesis in an early meeting with the Voting Writes team of collaborators. “This was the most important message to get across to voters at a time when registering and voting early, especially by mail, might make all the difference,” says Knable.

In writing Don’t Wait, Knable drew on his recent experience teaching American history through song. His lyrics explore several historical events, including “Nader-Traders” and the Tilden compromise of 1876, in which Rutherford Hayes became the President by agreeing to withdraw federal troops safeguarding Reconstruction in the Southern states. These history lessons add up: about voting, Knable sings, “I won’t wait / I can’t wait / I won’t make that mistake.” Though the message is urgent, the tone of the song is festive, with a fun backing shout chorus and Clinton-themed sax noodling.

Knable's other songwriting includes work as "The Jewbadour" for the Unorthodox Podcast and its accompanying demo album. He has played at East Coast venues including Mercury Lounge, The Knitting Factory, City Winery, and The Bell House in New York. As a playwright, Knable has worked with MCC Theater, Woolly Mammoth, Soho Rep, and New Jersey Rep. Previous albums Redbeard, Golden Arrow, and Green Man are available on all streaming platforms.

The Voting Writes Project is supported in part by the National Endowment for the Arts. It features commissioned virtual plays and short films, in-person solo shows, and other interactive experiences. All events are open and free to the public, though registration is encouraged. A complete calendar can be found at https://www.lunastage.org/voting-writes.