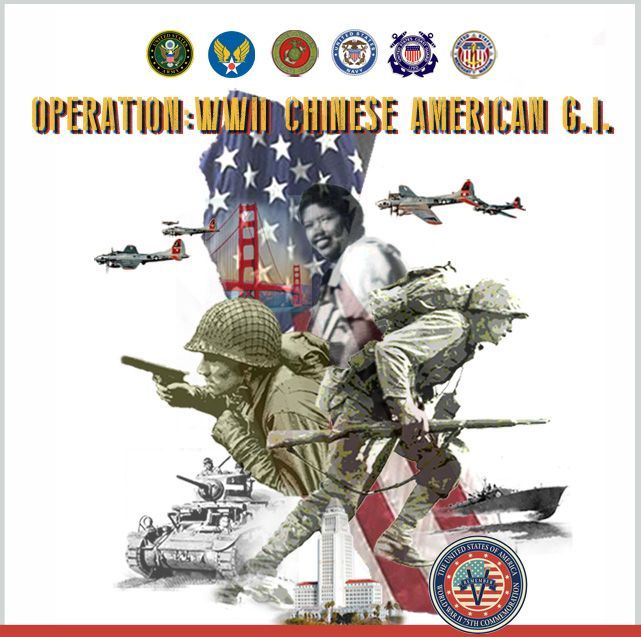 Join the 1,000+ people from across the U.S. who have registered for the live webinar Operation: WWII Chinese American G.I. this Saturday, August 29, 2020, at 4:15 P.M. EDT to pay respect to this forgotten generation of veterans ahead of the 75th anniversary of the end of WWII. (Above: Illustration by Evelyn Seto.)

This live webinar, supported by commemorative partners Chinese American Citizens Alliance, Chinese Historical Society of America, American Legion Cathay Post 384 and Museum of Chinese in America, is the first in a yearlong series of events to honor Chinese American Veterans of World War II whose acts of patriotism, loyalty, and courage occurred at a time when the Chinese Exclusion Act of 1882 prevented non-U.S. born Chinese Americans from obtaining citizenship.

The webinar will not just explore dates and places significant to Chinese American World War II history, but also explore the war through the lens of the world’s largest private collection of Chinese American and military memorabilia. Picture a pair of boots, with a medal beside it. Who was the hero who filled these shoes?

Additionally, a clip from the Emmy-nominated PBS film We Served with Pride: The Chinese American Experience in WWII, will be shown. This film features 15 Chinese American WWII Veterans whose common virtue was to serve with uncommon valor.

The keynote speaker will be filmmaker, author, and military historian Montgomery Hom who will share personal veteran stories as told through his collection of Chinese American WWII memorabilia, the largest private collection of its kind.