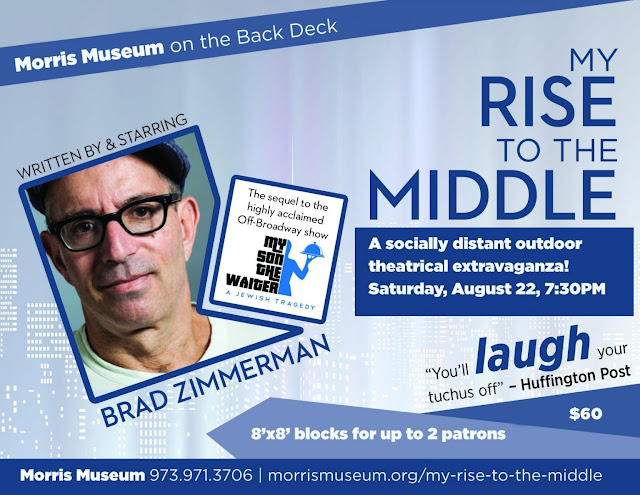 My Rise To The Middle

About His Lifetime Struggle to Make It as an Actor—A Sequel to His Hit Show, My Son the Waiter
WHEN: Saturday, August 22, at 7:30pm
WHERE: Morris Museum's Parking Deck, 6 Normandy Hgts. Rd., Morristown
TICKETS: Tickets and information can get gotten here or by calling 973.971.3706.

Comedian Brad Zimmerman returns to the Morris Museum with his new show, My Rise to the Middle, a sequel to his hit show,

My Son the Waiter, which delighted audiences in the Bickford Theatre last year. Brad, a Jersey native, continues with his hilarious stories of his childhood, his indentured servitude as a waiter, his meddling mother and misbegotten love life while he pursued a career in show business.

In his late 50's, a career breakthrough launched him as the opening act for comedy legends Joan Rivers and George Carlin.

This rags to...not rags story will inspire and entertain anyone who's pursued a dream with Brad's tangy, hilarious stories about what life is like in the entertainment industry when you're not a household name.

The Morris Museum Parking Deck has become New Jersey's hottest new entertainment venue, hosting jazz and classical concerts and special  performances like My Rise To The Middle in the open air overlooking the verdant hills of Morris County. Patrons can purchase socially distant 8X8 blocks and bring their own chairs and refreshments to safely enjoy this hilarious live show.