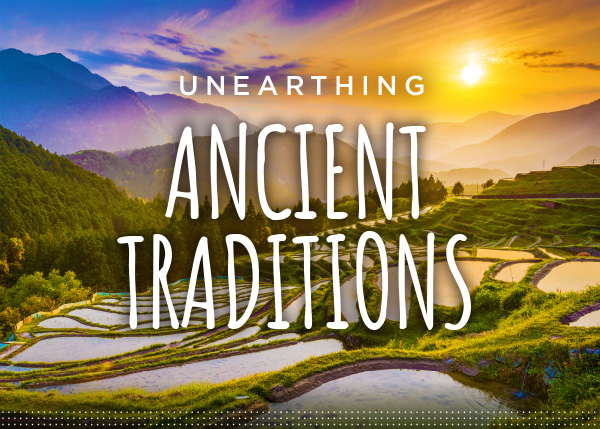 What is travel if not the opportunity to see and experience how other people live (or lived)? For curious, adventurous travelers, witnessing or experiencing ancient, cultural traditions on vacation offers a thrilling glimpse into the lives of those who came before us.

HERE ARE A HANDFUL OF EXAMPLES – SOME CURRENT, OTHERS BURIED IN HISTORY—TO FUEL YOUR WANDERLUST FOR EXOTIC DESTINATIONS
IN 2021 & BEYOND!

Puppetry is a highly refined, ancient theatrical art in India, China, Thailand, Cambodia, Japan and Vietnam. Used to retell legends, share morals, myths and even religious beliefs, puppetry has provided a means of important storytelling throughout history. Skilled puppeteers coordinate the complex movements of figures – made of wood and strings – and effectively “breathe life” into them as actors on a stage. The ancient art of puppetry can still be found throughout Asia today (and is a treat to anyone lucky enough to see a “show”).

THE SAMURAI AND THEIR SWORDS

Even though Saigo Takamori – remembered in Japanese history as the “last samurai” and one of the most influential – died in the late 1800s, the Katana (a Japanese sword used by samurai in ancient and feudal Japan) lives on. It takes many years to become a skilled katana-maker. The process hasn’t changed much in 700 years. Perhaps that’s why katanas today are seen as much as beautiful works of art as they are considered dangerous weapons.

Ta moko may look like a tattoo to an untrained eye, but to the Mãori – the indigenous Polynesian people of New Zealand (who arrived between 1320 and 1350) – it’s an inspirational, ancient art. Moko represents a visual language, often linking to ancestral symbols and stories of the wearer’s tribe. And although this artistic expression was lost for the better part of the 20th century, it has made a resurgence today, acting as a symbol of integrity, Mãori identity and prestige.

Excavating the tombs of kings, warriors and pharaohs who walked the earth hundreds (and thousands) of years ago, provides insight into burial customs, religion, beliefs about the after-life and even, construction. One of the most remarkable and mysterious discoveries from the ancient world has to be the underground Terracotta Army found in the underground palace of the first Qin Emperor of China (Qin Shi Huang, 221-206 B.C.E.) – the man credited with the construction of the Great Wall. His terracotta army – which includes at least 8,000 life-sized soldiers, 130 chariots and 530 horses, all with distinct, individual features – was discovered by farmers in 1974. To date, four pits have been partially excavated (one empty) and can be seen near the city of Xi’an in China’s Shaanxi Provence.