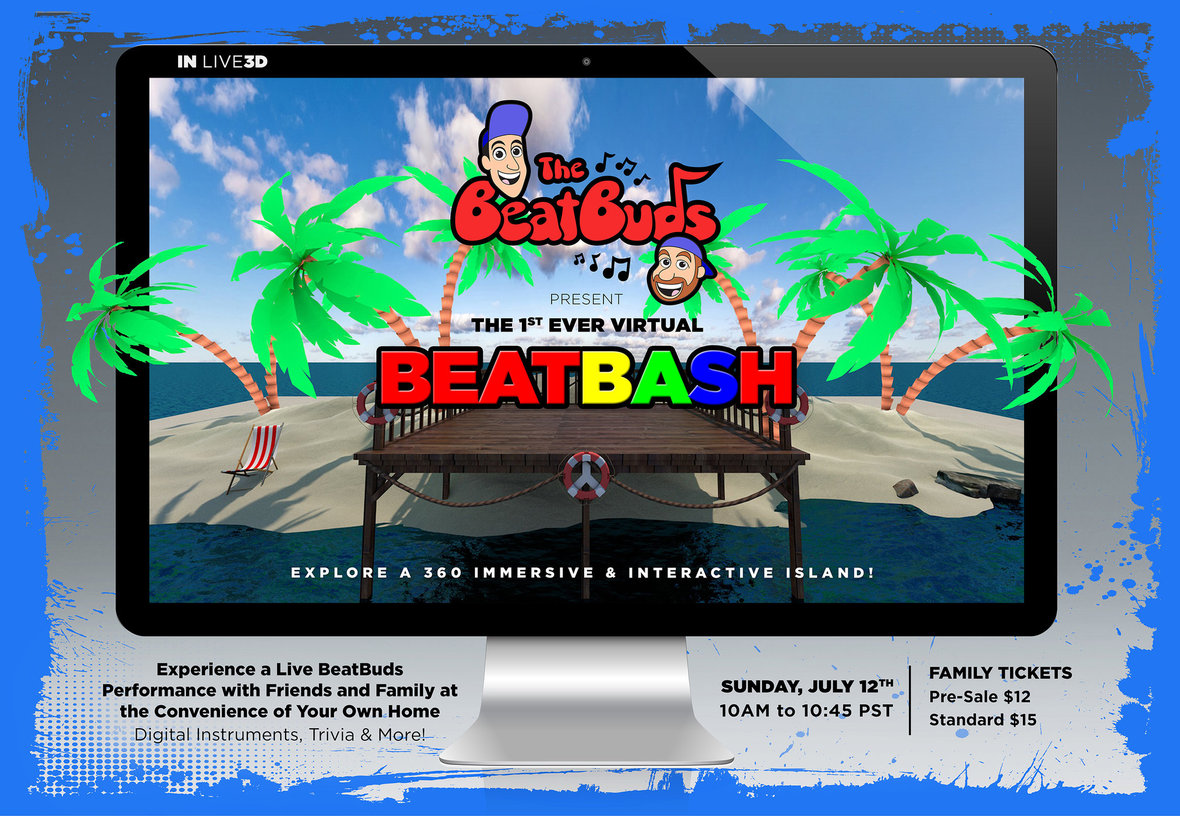 SOON TO BE ON NICKELODEON

TO BENEFIT "ROCK THE VOTE"

Each Family Ticket includes access to the livestream for one device.

Kids and families around the world can experience a live BeatBuds performance as a 360° interactive experience in the comfort of their own homes with the first-ever virtual BeatBASH on Sunday, July 12 at 10:00 a.m. Pacific Time. CLICK HERE FOR TICKETS. A portion of the proceeds from this concert will be donated to Rock The Vote.

The BeatBuds have partnered with Experiential Supply to create this first-of-its-kind virtual concert experience.

Together, The BeatBuds and their audience will explore a 360° immersive and interactive tropical island featuring an abundance of digital touchpoints, virtual instruments for kids to play, trivia games, and, of course, plenty of rockin' BeatBuds songs and sing-along action. Families and friends will even be able to see each other singing, dancing, and interacting!

No matter who we are, each of us has a voice, and our voices matter. A highlight of this special BeatBuds show will be the world premiere of a new single, "I Have a Voice." The BeatBuds want to empower and excite young children, alongside their families, regarding the importance of voting as the most effective way to be heard and make a change.

"In light of current events and out of a desire to ensure that everyone has a voice, we will donate a portion of proceeds of this concert to Rock The Vote," explains The BeatBuds' guitarist, Jonathan "Jonny" Jonah, a.k.a. Jonny Jingles. "Empowering young people to get educated, get out, and fill the ballot boxes is one of the most effective ways to be heard and make a change. Rock The Vote is a 30-year-old non-profit organization that has consistently worked hard to increase voter turnout and give young people a voice. We are very excited to contribute to the cause!"

"Music has always been a positive force in helping us get through tough times. We have so much in store for this show and couldn’t be more excited to be among the first to reintroduce a live music experience to families in a way that’s fun, innovative, and safe," adds The BeatBuds' drummer, Matthew "Matty" Shapiro, a.k.a. Matty Maracas. "As artists, it’s our job to keep families smiling, and that’s exactly what we plan to do. Let’s jam!"

Beloved by a large and devoted fan-base of families around the world – including an impressive list of celebrities who have invited them into their homes for birthday parties and music classes – The BeatBuds look forward to starring in their own animated preschool series on Nickelodeon, with production set to begin this summer and a 2021 premiere planned.

The BeatBuds are best friends and musical partners who have been playing together since the age of six. Jonny and Matty focus on composing catchy, educational children's songs that are a bit more contemporary than traditional children's music, while maintaining a fun and lighthearted feel. Their creative tunes touch upon a multitude of cultural and societal topics including positive self-image, tolerance, health and hygiene, safety, and environmental consciousness. With a truly parent-friendly artistic approach, The BeatBuds' music can aptly be termed “family” music. Among their toddler-approved hits are the songs “Gravity,” “Sam the Garbage Man,” "Hello to You All," "Silly Monkey," and “When the Rain Falls Down.”

Since 2012, The BeatBuds have performed over 6,000 gigs at venues including The Hollywood Palladium and The Fonda Theater and have released three full-length, original albums. They have partnered with iconic media mogul Scooter Braun of SB Projects (Justin Bieber, Ariana Grande, Kanye West, Demi Lovato, Dan & Shay, Psy, Tori Kelly, and owner of Big Machine Records), and together they are carving out their own exciting path to bring The BeatBuds to the entire world.