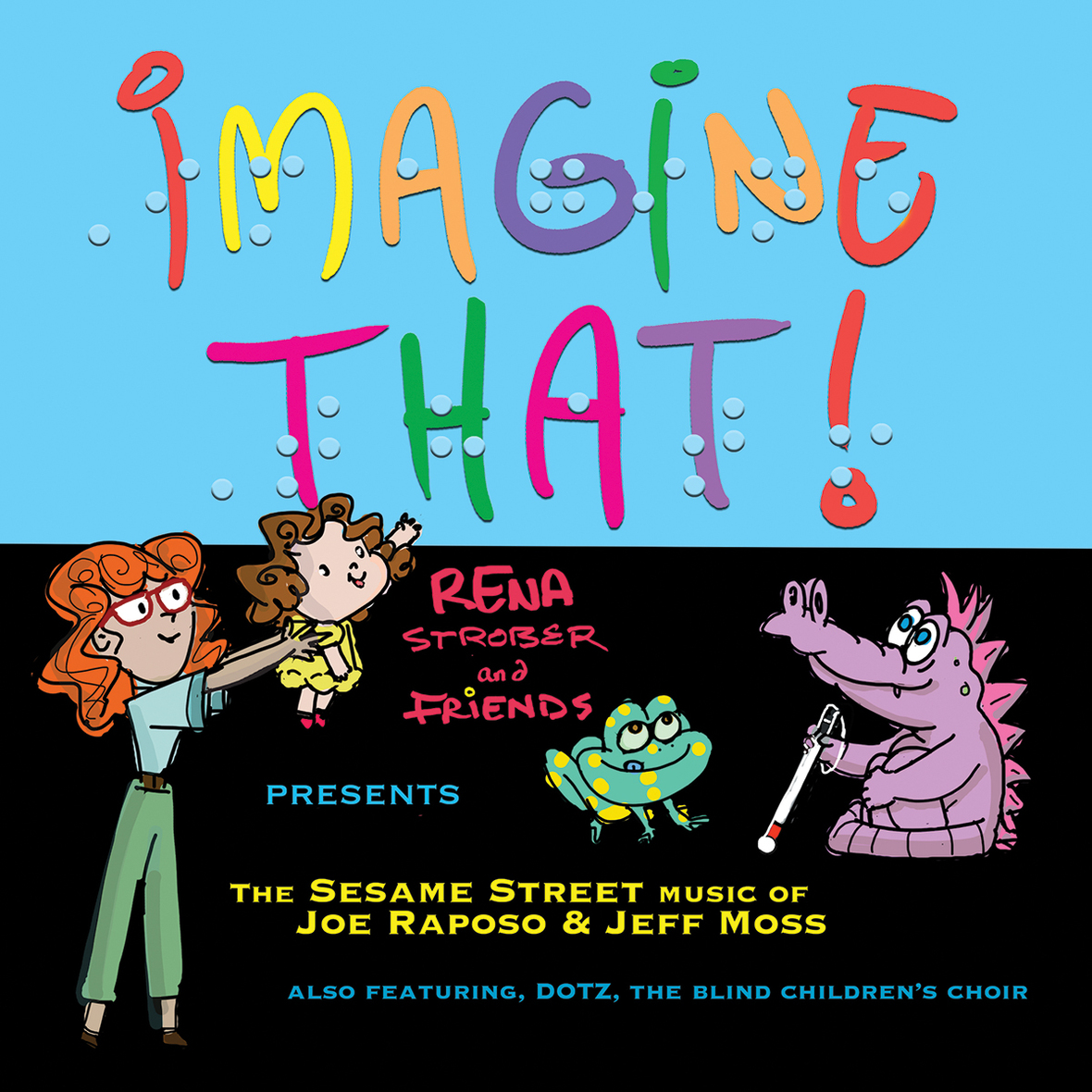 WHEN: Release date August 28
AGES: All ages
PRICE: $14.99 CD (with braille cover) or $9.99 digital download
Run time: 39 minutes
Sample the music HERE.
Imagine That! The Sesame Street Music of Joe Raposo & Jeff Moss will be available at renastrober.com and at all major online outlets.

”My family and I were thrilled to work with Rena Strober to bring this wonderful album to life. My father dedicated his life to respecting and nurturing all children, of every ability and heritage, everywhere." —Nick Raposo

Award-winning Broadway, film, and television actor and advocate for the blind, Rena Strober, is thrilled to announce the August 28 release of her new family album, Imagine That! The Sesame Street Music of Joe Raposo & Jeff Moss.

These iconic songs inspire decades of fond memories, yet are as engaging as ever for new little ears. They deserve the luxury treatment they get from this wildly talented, top-of-their-game team coming together to put on a classy show filled with a cheerful Broadway sense of style.

The many facets of this project coalesced via the trio of Fred Mollin, William “Chip” Beaman of Knighthawk Digital Entertainment Group, and the extraordinary vision of Broadway singer/producer Rena Strober, who says, “What the world needs now, more than ever, is the music of Sesame Street. We need to be reminded that being kind is simple and being ‘different’ is beautiful. No matter what your abilities or disabilities, if you ‘Believe in Yourself,’ you can do anything!”

Producer Fred Mollin (Rita Wilson, Linda Ronstadt, Lyle Lovett, Billy Joel, Steve Webb, and many others) has shaped Imagine That! The Sesame Street Music of Joe Raposo and Jeff Moss with sensitivity and skill to create an overall powerful unity of sound, style, and concept.

Highlights include Rena Strober’s exquisite vocals on “Imagine That!,” “I Don’t Want to Live on the Moon,” “Being Green,” “Sing,” “To Love a Child,” and “Imagination,” which show off her delightful storytelling charm. French Stewart and Jason Alexander bring their adorable humor to “I’m Pretty/I’m an Aardvark,” while Rena Strober and Jason Alexander make a perfect boy/girl duet of “Candy Hearts and Paper Flowers.” DOTZ, The Blind Children’s Choir shines on “Sing,” “Believe in Yourself,” “What Makes Music?,” “One Small Voice,” and “To Love a Child,” and Cristina Jones, Rena Strober, and Michael-Leon Wooley offer a rousing rendition of “High Middle Low,” enhanced in this version by musical saw, washboard, plectrum banjo, and tuba!

Imagine That! The Sesame Street Music of Joe Raposo & Jeff Moss is being released in celebration of National Guide Dog Month in September. A portion of the proceeds from all digital and hard copy sales of the album will go to Guide Dogs of America and the Gavin R. Stevens Foundation, whose mission is to find a treatment and cure for blindness, focusing on Leber’s Congenital Amaurosis (LCA).