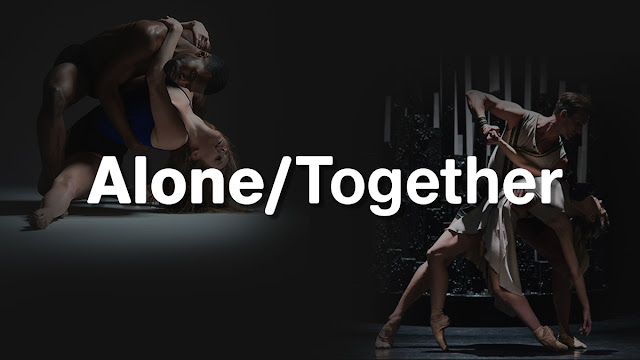 Over the past two months, two choreographers and 15 dancers have reached across the Atlantic Ocean to create a short work, Alone/Together.

This virtual collaboration has come about because the coronavirus brought the world to a stop, battering the economy, forcing a time of isolation and physical distancing, and for many, a loss of work. Artists were particularly hard hit as performances were cancelled, rehearsals terminated, and educational programs abruptly stopped or altered. The fragile dance community was immediately affected because the spring heralds major performances, much-needed fundraising galas, and intense preparation for summer dance initiatives and festivals, all of which were canceled.

This new way of life significantly influenced choreographers. Their space and environment for their creations and work were set by apartments and houses. Their basic tools—dancers—were now on the screens of their phones and computers.

But, at this time of great uncertainty and physical distancing, two artistic friends reached across thousands of miles to create a work that reinforces the unifying power of dance and the triumph of the human spirit. Carolyn Dorfman, the artistic director of the New York/New Jersey-based Carolyn Dorfman Dance, and Belma Čečo Bakrač, the ballet choreographer of the National Theater’s Sarajevo Ballet based in the capital city of Bosnia and Herzegovina, have asked their dancers to work with each other and with them to choreograph a piece that celebrates their common bond.

This relationship began in 2015 when Carolyn Dorfman Dance performed in the Sarajevo Winter Festival in the beautiful historic National Theater Sarajevo, home to the National Ballet. On this occasion, a workshop was organized with Carolyn Dorfman in the National Theater Sarajevo. The relationship blossomed in 2017, when the company raised funds through the Trust for Mutual Understanding to bring five dancers with Ms. Bakrač to the United States to train and prepare to dance with CDD in a November 2017 performance at the National Theater. The return tour and residency was sponsored by the US Embassy of Sarajevo.

“In these most challenging times when only glimmers of light seem visible through the tunnel, Carolyn Dorfman Dance wants to be one of those lights,” said Carolyn Dorfman. “Our dancers still rehearsed, our educational programs continued online, and the creative spirit flourished. Our friendship with the Sarajevo Ballet began in 2015 and gets stronger every year. We are thrilled to build on this partnership despite the hurdles of physical distancing and the pandemic.”

National Theater Sarajevo was founded in 1921 with an ensemble of drama. In 1946, an opera ensemble was formed followed by the founding of the Sarajevo Ballet in 1950. The Sarajevo Ballet, considered a jewel for the region, celebrated the 70th anniversary of its first independent performance which occurred on May 25, 1950.

In the 1970s and 1980s, the ballet ensemble had more than 60 members and was considered one of the best ballet ensembles in the then state of SFRY. Unfortunately, during the civil war from 1992 to 1996, the number of dancers was reduced to only six. Those were difficult times for the country and for the ensemble, which has been slowly recovering over the past 25 years. In recent years, Belma Čečo Bakrač, working as the company’s artistic director, has worked to strengthen the ensemble and provide a strong repertoire, which today includes classical works such as “Sleeping Beauty” and “The Nutcracker,” as well as contemporary ballets such as “Stabat Mater” and “Chained Prometheus.”

Five dancers from the company were an integral part of this effort: Zulejha Kečo, Lejla Bajramović, Selma Efendić, Admir Kalkan, and Til Čmančanin.

Now the ballet’s choreographer Belma Čečo Bakrač explained, “Dance is an art form that knows no borders, states, continents, gender, social status, racial distinction, or religion. It is the art that unites us and which has led to this partnership between the ballet of the Sarajevo National Theater and the company of Carolyn Dorfman. Working with our overseas friends helps us transcend the personal and professional disruption of the coronavirus.”

“Alone/Together” uses the music of contemporary Sarajevo composer Svjetlana Bukvich, who has composed two of Dorfman works. An award-winning composer Svjetlana has been called “one of the most interesting electronic writers around” and “a true musical Epicurean…whose music arouses in us a feeling of hope that is quite palpable.” Currently on the faculty at NYU and Pratt Institute, she has appeared in top venues around the world including The Kennedy Center, the Tribeca Film Festival, Berklee Performance Center, NJPAC and the Sarajevo Winter Festival.

For more information about Carolyn Dorfman Dance, go to www.carolyndorfman.dance.