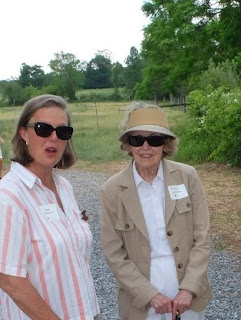 On May 5, New Jersey lost preservationist and philanthropist Betty Wold Johnson, at 99 fruitful years of age. D&R Greenway President and CEO, Linda Mead (left, with Betsy Wold Johnson), warmly remembers many facets of the land trust’s enthusiastic supporter: “Betty Wold Johnson’s heart was always in the land and community of Hopewell, where she lived on land she permanently preserved with D&R Greenway.” On the other side of the borough, “Her partnership was key to the success of our campaign to save the land that had been the site of the St. Michaels Orphanage, now the 415 acre St. Michaels Farm Preserve. Betty saw this open land as key to conserving the bucolic character of this special community.”

D&R Greenway announces a short video, found on its website, drgreenway.org, featuring Betty Wold Johnson filmed in her Hopewell home speaking about why it’s important to save land now.

Linda Mead remembers her professional friendship with Mrs. Johnson, focusing on how she came to permanently preserve the 800 acres she had assembled on the northwest edge of the village of Hopewell. D&R Greenway held a legal education program on land preservation at its Johnson Education Center, and Mead invited Mrs. Johnson to attend. At over 90 years of age she listened closely and then turned to Mead and said, “Let’s get busy.” A few weeks later, Mead was invited on a tour of Mrs. Johnson’s land.

“On a sunny fall day in 2013, Betty Wold Johnson drove her golf cart up a hill built in a wide, open field on her Hopewell land. At that time, she was 92 years young. It was just she and I circling to the summit, where two swings were too inviting to resist. We swung side-by-side, looking out over land where General George Washington and the Continental Army once encamped. The conversation we had while overlooking this historic land was revolutionary. Within months, Betty donated a conservation easement on her 800+ acres of land, ensuring it would remain forever as she loved it.”

With Mrs. Johnson’s commitment and crucial support, today a total of 1,200 acres of preserved land brackets Hopewell Borough. D&R Greenway invites the public to celebrate the legacy of Betty Wold Johnson by walking on lands she helped preserve, especially at St. Michaels Farm Preserve on Princeton Avenue in Hopewell. Mrs. Johnson was the first to donate to the creation of the David Knights Bridge over Bedens Brook, which leads from the Preserve’s iconic red barn to the Charles Evans Overlook with high, idyllic views of the historic town. Mrs. Johnson joined D&R Greenway and friends from the community on the day that the new bridge was dedicated. 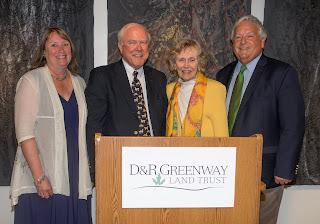 Land for Life is a phrase used by D&R Greenway to describe its mission of preserving and caring for land. Ensuring clean water, local farms and conservation lands to create a quality of life for the people and wildlife of the region was a goal held in common with Mrs. Johnson. Mead shares, “Recently, as D&R Greenway faced the reality of dwindling public funding to preserve land, Betty’s substantial gift enabled the first transaction of our Land for Life Revolving Land Fund. Fifty-two threatened acres were purchased and permanently protected with an agricultural easement. This property was recently sold to a family who now farms the land. The Fund has been replenished to ensure preservation of further properties. Betty's gifts continue to give, again and again.”

Johnson’s support ranged from McCarter Theatre to the Metropolitan Museum of Art; from the Hun School to Penn Medicine Princeton Medical Center. Most recently, she supported the Princeton Area Community Foundation’s COVID-19 Relief Fund to help regional nonprofits supporting residents with food, shelter, and other services during this crisis.

Linda Mead says of her: “Betty was the best she could be, and expected no less from the organizations and people she supported. She cared about the causes and those who did the work. Our staff still remembers a crisp fall day when Betty and her ‘right hand’ Kyle VanArsdale made a surprise visit to our ca. 1900 barn, which had belonged to her father-in-law General Robert Wood Johnson. They arrived bearing a wooden crate filled with the first apples of the season, to share with all the staff.”

Speaking of the Johnson Education Center, now D&R Greenway’s home, Mead says that, “Betty smiled when I showed her the finished RWJ Auditorium that she named. She took one look at the yellow chairs, and told me she was so glad that we chose those because they were a ‘happy color’.”

“Betty’s lifetime gifts to this region will live on forever,” declares Mead, who continues. “Betty will always be First Lady of Land Preservation. We are all the better for her having been among us.” Mead gives the nod for this title to pro Football Hall-of-Famer Curtis Martin. Speaking for the New York Jets, --owned by Johnson’s sons--, he reveals: “We called her ‘The First Lady of the Jets.’ If you look at everything [Betty Wold Johnson] did for others, you could write a book on her from a philanthropic standpoint. She had such a charitable heart and a charitable way about her.”

To see and hear Betty Wold Johnson speak about the Johnson Education Center and the importance of saving land in New Jersey, go to www.drgreenway.org.

D&R GREENWAY LAND TRUST IS IN ITS 31ST YEAR of preserving and stewarding natural lands, farmlands and open spaces throughout central and southern New Jersey. These properties remain protected and ecologically healthy in perpetuity. D&R Greenway thus continues to nurture a healthier and more diverse environment for people and wild species in seven counties.

Accredited by the national Land Trust Accreditation Commission, D&R Greenway’s mission is to preserve and care for land and inspire a conservation ethic, now and for the future. Since its founding in 1989, D&R Greenway has permanently preserved 21,000 acres, including 36 miles of public trails.