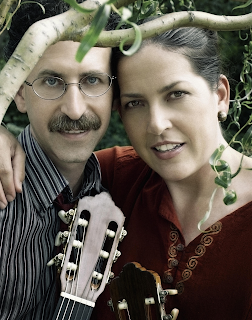 WHEN: May 2 – 23, 2020, at 7:30pm.
WHERE: entirely online with links to every event available through the www.RaritanRiverMusic.org website.

Acclaimed guitarists Laura Oltman and Michael Newman founded the Raritan River Music Festival with the promise of bringing live chamber music to historic venues in idyllic Hunterdon County. Co-Founding Artistic Director Michael Newman explains, “The past month has been the most difficult, challenging, and painful for the arts, artists, and lovers of art in anyone’s memory throughout the world.  In the midst of cancellations, loss of livelihood, and dearth of cultural and social enrichment, Raritan River Music stands firm in its commitment to make the 31st Raritan River Music Festival a reality – a VIRTUAL reality!” Laura Oltman, Raritan River Music’s Co-Founding Artistic Director adds, “We have continued to engage all the festival performers, who are right now developing special events for you to enjoy at home – live concert ‘watch parties,’ content provided exclusively for this festival event, and chat conversations in real time.”

The festival will open with a performance by the Argus String Quartet in a program Great Masters of Yesterday and Today on May 2, 2020 at 7:30pm featuring music by Bach, Fanny Mendelssohn and the New Jersey premiere performance of Conference of the Birds by Christopher Theofanidis. The Argus Quartet has emerged as one of today’s most versatile ensembles, winning First Prize at the M-Prize Competition and the Concert Artists Guild Competition and appearing in recent seasons at Carnegie Hall, Alice Tully Hall, and the Ravinia Festival. Highlights of the 2019-20 season include performances for Washington Performing Arts and Lincoln Center’s Great Performers series. Dedicated to the music of our time, Argus has worked closely with many famed composers.  Currently based in New York, the Quartet previously held residencies at Yale and Juilliard.

The Newman & Oltman Guitar Duo, hailed by the Washington Post as “a revelation to hear,” will be joined by the award winning Rene Izquierdo, one of the most sought-after guitarists on the scene, for an evening of hot Cuban dances and works from the past 100 years in a special A la Cubana: A Century of Music from the Pearl of the Antilles program. The evening will include music from the duo’s new MusicMasters release The Book of Imaginary Beings dedicated to the works of legendary composer Leo Brouwer on May 9, 2020 at 7:20pm. This special release party for the Newman & Oltman Guitar Duo’s recording will include the new duet composed for the duo and commissioned by Raritan River Music, as well as Brouwer’s arrangement of The Fool on the Hill and She’s Leaving Home by the Beatles, plus Música Incidental Campesina.

On May 16 at 7:30pm the Meridionalis Instrumental and Vocal Ensemble, under the direction of Sebastian Zubieta will perform a program Selva Musical / Transatlantic Baroque: Music of Spain and the New World which includes works drawn from the Hispanic Society’s remarkable collection of music from the mid-1500s through the Baroque era.  Included will be “Enigma” puzzle pieces, extravagant ornamentations, and music from the Spanish musical forest of times past.

Closing the festival is The Philadelphia Flute Quartet on May 23 at 7:30pm. The Music of the Ages for the Entire Family program will feature the New Jersey premiere of Hidden River by Eric Sessler. This ensemble comprises the region’s top flute soloists and orchestral players. Their varied and engaging program offers a nod to the 100th anniversary of the 19th Amendment with music by award-winning American women.

Under Laura and Michael’s stewardship, Raritan River Music (RRM) has evolved into more than the annual festival concerts in May by delivering programs year-round for young children, seniors, and patients at health-care facilities around the region. RRM also creates a legacy of new works and recordings commissioned by RRM’s patrons, as well as presenting new music at each concert by local school-age composers.