Dreamcatcher Repertory Theatre, professional Theatre in Residence at the Oakes Center in Summit, will present its annual

WHEN:  Wednesdays, May 6, 13, and 20. All readings will take place at 7 pm
WHERE: All readings will take place on Zoom, and require advance registration.
AMISSION: $10, and tickets can be purchased at www.dreamcatcherrep.org or by calling Brown Paper Tickets at 800-838-3006. A link to the performance will be sent thirty minutes prior to its start.
For information on any of Dreamcatcher Repertory Theatre's programs, please contact Dreamcatcher Repertory Theatre at the Oakes Center, 120 Morris Avenue, Summit, NJ 07901, 908-514-9654, www.DreamcatcherRep.org.

The new play reading series is a chance for the audience to participate in the development of new works, both to hear the plays read by professional actors and also to discuss the projects with the playwright, director and actors afterward. Although the readings will take place online this year, there will be an opportunity for the audience to provide feedback to the team.

The May 6 reading, Steve Harper’s Black/Out Stories, is supported in part by Stages Online, a partnership with New Jersey Theatre Alliance to bring theatre content into homes during the COVID-19 pandemic. Stages Online is made possible by generous funding from the New Jersey State Council on the Arts, a Partner Agency of the National Endowment for the Arts, Bank of America,The Horizon Foundation for New Jersey, OceanFirst Foundation; the George A. Ohl, Jr. Trust; New Jersey Historical Commission; and Fund for the New Jersey Blind.

Black/Out Stories is directed by Mark Spina, Artistic Director of The Theater Project. The play is the narrator's search for a pattern in black people's coming out experiences that will somehow illuminate his own, and help him to understand his place in the larger community. Highly personal, sometimes painful and sometimes funny, interviews with a variety of people willing to share their coming out stories are laced with the writer’s own quest for peace and clarity. 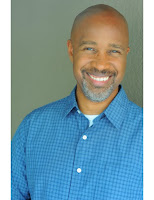 Steve Harper is a writer and actor. He served as producer on the CBS show God Friended Me. He was co-producer on the upcoming HBO Max series Tell Me Your Secrets and wrote for ABC’s American Crime (created by John Ridley) and two seasons on the USA network’s Covert Affairs. His original web series SEND ME—about time traveling black people—premiered on BET.com to 1.66 million views and garnered a 2016 Emmy nomination for series lead Tracie Thoms. His plays have been workshopped and produced in New York, L.A. and in between. As an actor, he’s worked in theater, film TV and commercials. Steve coaches writers and artists through his company Your Creative Life.

On May 13, Dreamcatcher will present a reading of Tracy Jones by Stephen Kaplan. Directed by Laura Ekstrand, Dreamcatcher’s Artistic Director, the play tells the story of a woman who is throwing a party to which she's invited every woman in the world who is also named Tracy Jones. Tracy Jones has been sitting for over an hour alone, nursing her Diet Coke, waiting for any other Tracy Joneses to show up. Tracy Jones' epic loneliness is about to be tested beyond anything she ever imagined.

The Buzzer by chandra thomas will be directed by Marshall Jones III and will be read on May 20. Set in Newark, The Buzzer is the story of a couple of young professionals moving into, and perhaps changing forever, a new neighborhood. As they struggle with personal questions about the future of their relationship and their desire - or not - to have children of their own, a young boy and his social worker change the direction of their future. With humor and warmth, the play explores the interconnectedness of its characters, and the responsibility we all have to each other and to our communities.

chandra thomas is an actor, writer and producer who is active on both coasts. As a writer, her work includes new media projects like Complete Sentences? and plays like a rhyme for the UNDERground, Standing At… (Heideman Award Finalist—National Ten-Minute Play Contest of Actors Theatre of Louisville / Source Festival Semi-Finalist; named a top play in the Downtown Urban Theatre Festival) and Forgive to Forget. chandra also writes screenplays and performance poetry.