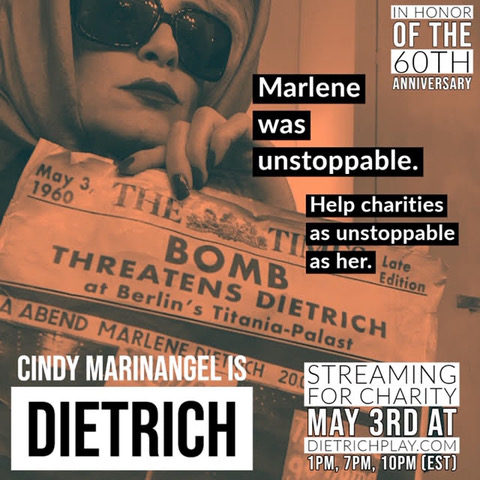 DIETRICH, an acclaimed one-woman play that brings iconic German actress Marlene Dietrich to life, will stream to help raise money for important causes. A one-minute trailer can be viewed at http://www.dietrichplay.com.

WHEN: Sunday, May 3, 1 PM; 7 PM; 10 PM
HOW TO WATCH: viewers can watch at http://www.dietrichplay.com
ADMISSION:  Each performance is free, however a donation to one of five charitable causes is requested.

Contributions can be made directly to each individual charity, whose links are live on the DIETRICH website now and can be accessed below.

The benefitting causes were selected by producers due to the impact they are having in their communities, across the country, and around the world. They are:

4. The Lucky Cat Rescue, a local rescue group that works to save stray cats and kittens in New Jersey. https://www.theluckycatrescue.org/

5. Woodstock Museum, which works to gather, display, disseminate, and develop the concept of Woodstock, encompassing the culture and history of a living colony of the arts, and much more. http://woodstockmuseum.com

Not only will viewers get to donate to great causes but they can enjoy the DIETRICH experience from their living rooms on the anniversary of this historic day in her life.

Sixty years ago—on May 3rd, 1960—Dietrich returned to the Berlin stage for the first time since fleeing the Hitler regime in the late1930’s. Inside her dressing room at the Tatiana Palast Theatre, Dietrich weighs whether or not to go through with the live performance despite threats on her life by Nazi sympathizers who resented her for having spent much of World War II entertaining American soldiers on the front lines. To them, Dietrich is a turncoat; a traitor who deserves to be shot and killed on stage.

Marinangel is an international entertainer, a Lifetime Member of The Actors Studio and a graduate of the Chicago Second City Conservatory. She is an avid ballroom dancer and animal rights activist. Learn more at cindymarinangel.com.

Manus is a playwright, journalist and novelist. He is a member of the Playwright/Directors unit of The Actors Studio. His most recent plays are “Joe and Marilyn: A Love Story,” “Frank and Ava” (now a motion picture) and “Who Killed Comrade Rabbit?”

For her part, Dietrich was frequently honored for her work for improving morale on the front lines during WWII. She earned the U.S. Medal of Freedom and the French Legion d'Honneur. The Kingdom of Belgium named Dietrich a Knight of the Order of Leopold. In 1999, the American Film Institute named Dietrich the ninth-greatest female star of classic Hollywood cinema.