Given the recent spate of antisemitic violence and vandalism, this would be a good time to revive The Diary of Anne Frank, if only to remind us of the human costs of hatred, especially on children. Of the 1.5 million children who perished in the Holocaust, none is as well known as 13-year-old diarist Anne Frank who, by chronicling her two years hiding from the Nazis, has become a symbol of life cut short before it could reach its artistic potential.

Kudos to the Summit Playhouse for their sweet, yet sobering, production of this play, the second production of their 101st season. It is a terrific way to introduce young people to the Holocaust while reminding adults about the perils of letting hateful demagoguery go unchecked.

Unless you’ve been hibernating for the past 75 years, the story of the Jewish Frank family is familiar. In a garret, high above the streets and canals of Amsterdam in the building housing Mr. Frank’s spice business, the four members of the Frank family, the three Van Daans and Dr. Dussel spent three years of self-imposed exile from the Nazis, supported by kind and helpful Christians, Mr. Kraler and Miep Gies, who scrounged for food and brought them news of the outside world. Upon their arrest by the Gestapo/Green Police, the diary was left behind to be salvaged by Miep and given to Otto Frank, the only survivor of the group, upon his return from Auschwitz several years later. In memory of his daughter, he offered it for publication to the world and permitted Frances Goodrich and Albert Hackett to dramatize the events narrated therein. In 1997, after original text deleted by Otto Frank was restored to the diary, Wendy Kesselman adapted the script, eliminating some of its blatantly melodramatic parts and making several characters—most notably, Mr. Van Daan—more human.

Stephen Catron, assisted by Kevern Cameron, has constructed a simple, yet evocative, set on the playhouse’s small stage that aptly conveys the claustrophobic atmosphere of the four small rooms inhabited by eight grown people; a small platform suggests a space under the building’s eaves where Anne and Peter can spend some time alone together. Wendy Roome’s lighting conveys the passage of time, while Bob Jukac’s sound design is appropriately jarring and menacing. The tolling bells of the nearby Westerkirk never let us forget the doom awaiting the residents of the Secret Annexe, as Anne calls their hiding place. Anne Lowe’s1940s-ish costumes give an appropriate sense of place and time. And Director Karen Thornton has choreographed the actors’ movements the cramped space as they go about their day to day living, loving and arguing.

In the title role, Ava Chrusciel (left, with Christopher C. Gibbs as Otto Frank) is a whirlwind of motion, chatting nonstop as she anticipates a romantic adventure. Upon arrival and through much of the first act, she bounces around the attic, annoying almost everyone except her father; after a brief intermission, however, her charming brattiness gives way to a more philosophical, more sympathetic demeanor. Chrusciel’s almost nonstop delivery called for by the script makes manifest why she drove Mr. Van Daan to distraction with her chatter. However, her rushed recitation of her diary entries fails to convey the introspection needed to write about her experiences, dreams and emotions.

Rachel Gesner is quite fine as the rather mousy, goody-two-shoes Margot—a thankless role—who too often acts as a foil to her sister Anne’s spirited personality; she shines in an intimate conversation with her vivacious sister about any jealousy she may feel about Anne and Peter Van Daan's budding relationship. Will Nissen is good as Peter, all awkward sulkiness and stammering in the beginning but warming to the attentions of Mr. Frank and Anne. He was difficult to hear in the beginning but found his footing as the play progressed. The moment (and kiss) shared by Peter and Anne in the garret is touching and tender.

While Christopher C. Gibbs’ Otto Frank (right, with Gesner and Chrusciel) captures the reserved correctness of the German male of the era, he fails to convey the charm and warmth toward his children that Anne lauds the diary. Charles Grayson’s Dussel lacks the fuss-budget-y mannerisms that make the man so difficult to live with. Gordon Wiener is appropriately insufferable as Mr. Van Daan. He whines, complains and ultimately breaks down when discovered stealing bread. Just watching him sit dejectedly on the edge of the bed is heartbreaking. Jay Mattila is a steady Kraler, and Annie Belkin a helpful Miep. One quibble: the Nazis enter the attic too quietly. Their banging up the stairs should be a harbinger of the terrors to come. 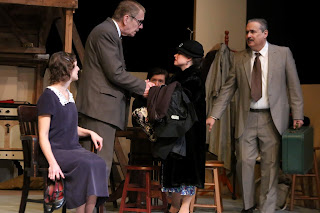 But the real stars of the play are Joëlle Bochner as Edith Frank (far left) and Paula Ehrenberg as Petronella Van Daan (second from right). Bochner convincingly conveys Edith’s prim character, concern with appearances, dismay and disappointment with her troubled relationship with her younger daughter. Our hearts ache when Anne is disrespectful toward her mother. And Edith’s overpowering fear is made manifest as Bochner shakes, cowers and weeps upon entering the attic. Her outburst near the end of the play upon finding Mr. Van Daan stealing food is a masterpiece of outrage and disappointment; the roof of the playhouse shakes with her thunder.

As Petronella Van Daan, the diminutive Ehrenberg (far right, with Chrusciel) is all blowsy outrageousness, a spoiled woman who would not give up her riches to escape to England and who hangs onto her fur coat even in the Annexe as a symbol of her former life. Flirting with Otto Frank, right in front of his daughters, and assuming that the chaste visits Anne makes to Peter’s room are more than they appear to be, Ehrenberg’s Petronella is maddening and pathetic at the same time.

Had she lived, Anne Frank would be about 91 years old today. Anyone who has read the diary—especially the newer version, complete with her revisions of various passages she was preparing for publication at the end of the war—will concur that she has fulfilled her wish of being remarkable and living after her death.

Considering the many references to Nazis and Hitler so prevalent in our political discourse and the seeming lack of knowledge in other parts of the country about the Holocaust, it is important that we be reminded of one of the true tragedies of this terrible period in history: the cutting short of a creative life before it has had a chance to reach its true potential. Anne Frank may have been but one child in 1.5 million murdered, but she is a fine representative of what the world has lost in their passing. The Diary of Anne Frank reminds us and calls us to never let it happen again.

The Diary of Anne Frank will be performed at the Summit Playhouse, 10 New England Avenue, Summit, through March 14. For information and tickets, call 908.273.2192 or visit www.TheSummitPlayhouse.org online.