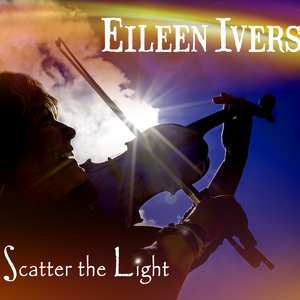 “Music, like math, is a discipline with its own set of rules and patterns. The scales and chords, the time signatures of the rhythms are all there, so you know where you're going when playing with other musicians. But sometimes, in the moment, the logic drops, and your heart takes over. Maybe you're improvising and you're holding a note longer than it should be held, and the chords are changing...and it's a little egregious and might rub those chords the wrong way. The logic starts to panic, but it is tugging at your heart and it feels so, so right...so you give in to the instinct. That's when the really great moments of art happen.”

So says virtuoso fiddler Eileen Ivers, the Grammy-winning and Emmy-nominated performer, composer, producer, and female bandleader, who the New York Times has called "the Jimi Hendrix of the violin,". Growing up in the Bronx, the daughter of Irish immigrants, with a natural talent for the music of her parents’ homeland and a sharp mind for mathematics—a field in which she pursued post-graduate studies—Ivers has lived and breathed the interplay of discipline and improvisation for years and knows how to combine heart and passion with incredible technical precision. She has been awarded a Doctor of Arts, honoris causa for her “lifelong commitment to innovation, excellence and deep dedication to bringing people together through music.”

On her latest album, Scatter the Light (to be released 2020 on Musical Bridge Records), Ivers puts heart over head and brings together a gorgeous array of tracks inspired by everything from meditations on family, faith, gratitude, and loss to calls-of-action for living in the moment, taking chances, and finding the strength to survive sexual assault. Comprised of eleven airs, jigs, reels, instrumentals and songs, all but two of the album’s tracks are original compositions.

The record, co-produced and engineered by husband and collaborator Brian Mulligan, follows on the back of Ivers’s previously celebrated rec ord Beyond the Bog Road, an album that was, from an intellectual and musical standpoint, very ethnologically-driven its showcasing of Irish music’s journey through North America integrating with blues, roots, and Americana to create one of the richest cross-fertilizations of folk music styles in the world.

“This one really came from the heart,” reflects Ivers. “and maybe it was, in some ways, a reaction to the cerebral nature of the last record. I let my heart guide me and then, thankfully, I started to see patterns and shapes forming. When I look at the record, I see myself, my thoughts and even my dreams, all connected through the 11 tracks.”.

As a collection of songs, Scatter the Light delves profoundly and wholeheartedly into stories and reflections that connect us, often with both inspiring and hear t-wrenching moments, and the album’s themes go far deeper than the sparkle and dash of brilliant fiddling.

Lyrically, the album’s lead track "Shine" sums up a lot of what Scatter the Light is about, and it sets the tone for the entirety of the recordin g.  The chorus, 'I won't lose time, I'm going to make it mine. As time flies, it leaves my shadow behind. So I'm going to shine’ puts forth the simple message that life is short, life is fragile; it is fleeting and precious. So we must make the most of the time that we have here …be good, do good …scatter the light.

A nod to Ivers’s love of math, science, and space, the third track "Zero G" is inspired by astronaut John Glenn’s legendary exclamation as he first orbited the Earth in 1962, “Zero G and I feel fine!”  Ivers feels that “the bravery and fearlessness of trusting in math and science, coupled with the ingenuity and creativity of incredible dreamers to explore the unknown, to learn, to grow...is truly heroic and essential to being alive.”  The piece is an Irish reel in its form and Ivers wanted to make the chordal structure accessible. As she composed and the tune began to come to shape through the chords, she suddenly felt a feeling of freedom, flight, and positive energy.

Yet, such free and easy flights of fancy are tempered by the album’s final track “You Are Strong,” based on a traumatic account of sexual assault that Ivers was shocked to read on a friend’s Facebook post. With permission, Ivers put the post to music with the hope of it possibly helping others and with the conviction that the victim’s strength is yet another testament that light does indeed shine through the darkness. “Not everything in life is beautiful but there's beauty in life. We can make a difference, and in her own way, by reaching out and sharing, she was finding that light and scattering that beauty.”

Ivers’s prowess with the fiddle has won her not only nine All-Ireland Fiddle Championships, but also the admiration of and shared stages with world-class musicians from Sting, Patti Smith, Hall & Oates and The Chieftains to elite musical organizations like the London Symphony Orchestra, Boston Pops, and over 50 orchestras worldwide. She was the original Musical Star of Riverdance, a founding member of Cherish the Ladies, and has been featured on movie soundtracks including “Gangs of New York,” all between g igs performing for presidents, royal families, and adoring fans worldwide.

Ivers’s music is far broader than her early folk and Celtic foundations.  She has become the celebrated, all-encompassing musician who has always been forward-thinking about both tradition and experimenting with her instrument. With ears and heart wide open for new approaches and innovative sounds, she has long been drawn to the multicultural and multifaceted American musical palate and unafraid to incorporate new styles and cutting-edge gear into her sound.

When she was 18 years old, she walked into the historic Manny’s Music in NYC and her eyes shot immediately to the electric-blue violin in the window. A shaggy-haired employee handed her the instrument and then proceeded to set up a row of guitar effects-pedals in front of her: reverbs, flangers, phasers, delays, octave dividers and Wahs ...her life was never the same after that. “I left the store with my blue fiddle and a bunch of guitar effects-pedals that I played really obnoxiously with at bar gigs and club gigs t hat weekend!” exclaims Ivers.

This gear, and newer looping innovations, opened up a fresh, bold palette of expression for Ivers when coupled with what the violin can do as an instrument. She has been doing loops live for a number of years now and she is always impressed by how much the audiences dig it.  “I love to open people’s minds and hearts to what one solo instrument can do,” says Ivers. “The fiddle can be percussive, it can play a bass line, it can lay down a guitar groove or it can be the lead …it can be the many s trings that pull at your heartstrings. To encapsulate that in one loop is a very powerful statement.”

Ivers notes that the music she plays with her band is very emotive. At times, it is absolutely joyful and uplifting, and there are also times when they'll touch on something that is outright heartbreaking and ultimately cathartic. “But there is always light in the universe,” says Ivers. “In deep, deep space, there may be black holes, but in our Earth's atmosphere, as in our lives, there's never actually full darkness.”