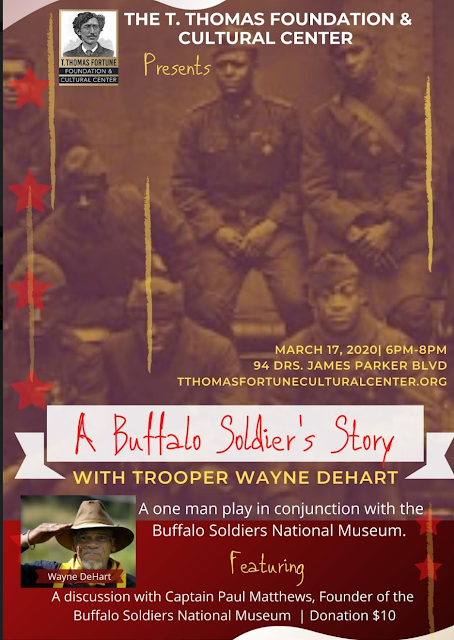 Many are familiar with DeHart in his role as Old Joe, in August Wilson’s Tony
Award-winning play, Radio Golf, now playing at Two River Theater.

The Center is honored to present the veteran actor in a one-night-only performance that chronicles Dehart’s first encounter with the Buffalo Soldiers. The show takes the audience on a journey of his desire to become a soldier and sheds light on his induction into the all-Black cavalry.

Before DeHart’s performance, Captain Paul J. Matthews, founder of the Buffalo
Soldiers National Museum in Houston, Texas, will lead a discussion on the Buffalo
Soldiers. This museum is the only one of its kind, that preserves and promotes the
entire African American military experience, from the Revolutionary War to the
Persian Gulf War.

Brandon Dirden, who directs Dehart in Radio Golf, lavished praise on the actor, calling him “the best” when casting for the play. Dirden, who hails from Houston, Texas, is all too familiar with the museum, as well as with DeHart, who also lives in Houston. He notes that every time DeHart hits the stage, the audience knows it’s going to be a down-home, universal teachable moment.

Dehart’s dramatic performance is an engaging historical narrative and chapter in
American History that has been largely overlooked.

Join us for an eventful evening in a salute to the Buffalo Soldiers.