REVIEW: “UNMASKED: THE MUSIC OF ANDREW LLOYD WEBBER” AT THE PAPER MILL PLAYHOUSE IS ALL THAT COULD BE ASKED FOR IN A TRIBUTE MUSICAL 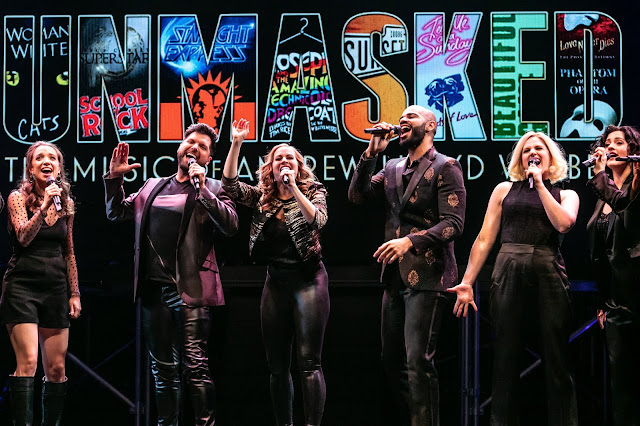 For close to 50 years, Andrew Lloyd Webber has been a prolific composer of musical theater. Two of his works are among the longest running shows on Broadway. Several songs from the plays have made pop music charts. He has tackled off-beat stories with complex melodies and innovative staging—sometimes with success and sometimes not. And his knighting by Queen Elizabeth II allows him to affix the title “Sir” to his name. (Top: Alex Finke, Mauricio Martinez, Mamie Parris, Nicholas Edwards, Amy Justman and Alyssa Giannetti; photo by Jerry Dalia)

Now, the Paper Mill Playhouse presents a behind-the-scenes look at Webber’s oeuvre and life in the world première of Unmasked: The Music of Andrew Lloyd Webber, a curated musical portrait featuring comments and background by none other than the composer himself via video. 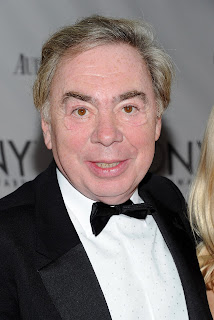 The revue-like configuration of this “concert for the theater” gives theatergoers a glimpse of Webber’s quirky and bohemian youth, along with the creation of his smash hits (Jesus Christ Superstar, Cats, Evita, Phantom of the Opera and Sunset Boulevard). His commentary recounts the sometimes-surprising evolution of some of his best-loved shows and songs. Indeed, the song list contains those plus some lesser known gems and some new material written for this production.

The result is both a trip down memory lane (pardon the pun) and a journey into lesser known waters. The cast of 12 assembled by Director Joann M. Hunter magnificently interprets Webber’s music (and Tim Rice’s lyrics); that the musical numbers are presented pretty much without relation to plot means that anyone who has not seen most of the shows from which they are taken might miss some of the songs’ nuances and importance. That said, Unmasked is a real treat for lovers of musical theater and a great tribute to Webber’s career.

Eschewing chronological order (and the “and then I wrote” route), Webber and his co-writer Richard Curtis give us medleys from Joseph and the Amazing Technicolor Dreamcoat, Evita, Cats, Phantom and Sunset Boulevard, interspersed with a love medley from the less successful Aspects of Love, Love Never Dies and Tell Me on a Sunday. The material written for Unmasked, “Here We Are on Broadway” and “The Song That Everyone Hates,” are pretty much throw-away numbers and don’t match the genius of the rest of the revue.

Standout performances include Amy Justman singing “I Don’t Know How to Love Him”; not only does she have a beautiful voice but she actually acts the lyrics to give them depth beyond just the melody. Mauricio Martinez (right) brings down the house with “Gethsemane” from Superstar, recounting Christ’s agony in the garden before his capture and execution in a palpable and excruciatingly poignant performance. Alyssa Giannetti’s four-octave voice soars in thrilling renditions of “Unexpected Song” from Sunday and “Pie Jesu” from Requiem. “Sunset Boulevard,” sung by Jeremy Landon Hays, is rousing, and Rema Webb invests “With One Look” and “As If We Never Said Goodbye” with haunting loneliness. (Above, right: Mauricio Martinez;photo by Matthew Murphy)

Others performing admirably are Mamie Parris (“Memory”) and Bronson Norris Murphy (“Music of the Night” from Phantom, left with Alyssa Giannetti). The single disappointment for me is the performance of Andrew Kober. Similar to his recent turn in Cinderella, he’s very loud and quite snarly in “Skimbleshanks” (Cats) and ensemble work, but the persona works best in the evening’s finale, “Stick It to the Man” from School of Rock. 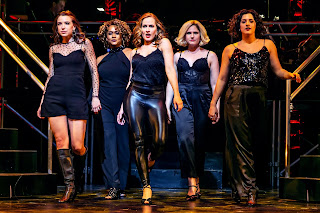 Alexander Dodge’s effective scenic design (a girdered proscenium and a pair of movable staircases) and simple black costumes (right) supplemented by jackets, over blouses and skirts allow us to focus on the music. A descending screen presents Lord Webber’s commentary from a variety of venues: at home, seated at the piano, in a restaurant booth and even on a walk, thus creating an intimacy between composer and audience. Ed McCarthy’s lighting design is unobtrusive yet atmospheric, while Jon Weston’s sound design ensures that the orchestra, perched at the back of the stage and conducted by Michael Patrick Walker, never overpowers the performers. Joann M. Hunter’s sparing choreography provides adequate accompaniment to the musical numbers. (Above: Finke, Webb, Parris, Justman and Giannetti. Photo by Jerry Dalia) 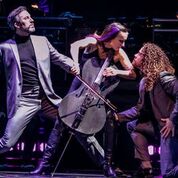 Andrew Lloyd Webber’s theater musicals and music may not be as ubiquitous and well known as those of Rogers and Hammerstein, but his willingness to take risks in subject matter and melody marks him as one of the best stage composers of all time. While his plays are sometimes slim in plot (Cats, Aspects of Love, for example), they make up this deficit for in melody. And those with strong plots (Evita, Phantom, Superstar, Sunset Boulevard) are so stuffed with singing that they often feel like operas! (Left: Dave Schoonover, Marta Bagratuni, and Angel Lozada. Photo by Jerry Dalia)

With Unmasked and Paper Mill Playhouse’s royal treatment, Andrew Lloyd Webber gets the tribute he deserves. Scheduled for last year, the show never came to fruition, but the wait was worth it.

If you find yourself humming “Memory,” “Don’t Cry for Me, Argentina” or “All I Ask of You” in the shower, this show is for you.

If you love the magic of Evita and Phantom of the Opera (still running on Broadway), this show is for you.

If you love hearing talented singers perform lush and challenging music, this show is for you.

If you love musical theater as much as I do, this show is for you. You won’t want to miss it before it closes on Sunday, March 1!

The theater offers accessibility performances at the Sunday, February 23 and 29, matinees. A sign-interpreted, open-captioned performance is scheduled for Sunday, March 1, at 7 PM.

For information and tickets, call the box office at 973.376.7676 or visit www.PaperMill.org on line.